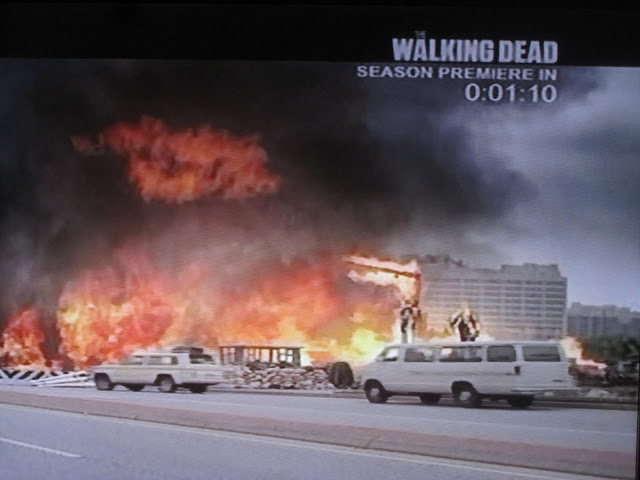 Ahh The Walking Dead. I hope everyone out there watches this show. I watch a variety of shows such as Top Chef, Gossip Girl, The Vampire Diaries, Glee, Mad Men, Boardwalk Empire, Revenge and American Horror Story ... but this is the ONLY show that Boyfriend and I make time for together - and most importantly, in real time. We do watch other shows together such as Community, Parks & Recreations, 30 Rock, Game of Thrones, and Terra Nova, but these are often a taped/downloaded recording since I'm basically hogging all the prime TV time for my shows. 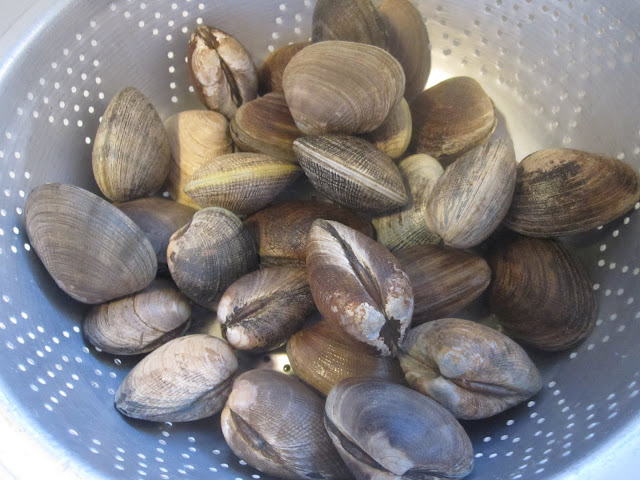 The much anticipated season 2 of The Walking Dead was broadcasted Sunday night on AMC. Did you watch? If not, you can even catch up on season 1 very quickly - it was only six episodes. I guess they didn't commission an entire season because they didn't know how viewers would respond. Needless to say, it was a smash hit, especially to followers of the graphic novel (umm like Boyfriend). Since we had just wrapped up a whirlwind week of car shopping, more car shopping and then car purchasing, I busted out dinner from the Sunday Suppers at Lucques cookbook. As you can see from the top picture, I put dinner on the [coffee] table with 1 minute 10 seconds to spare. Woot for me! 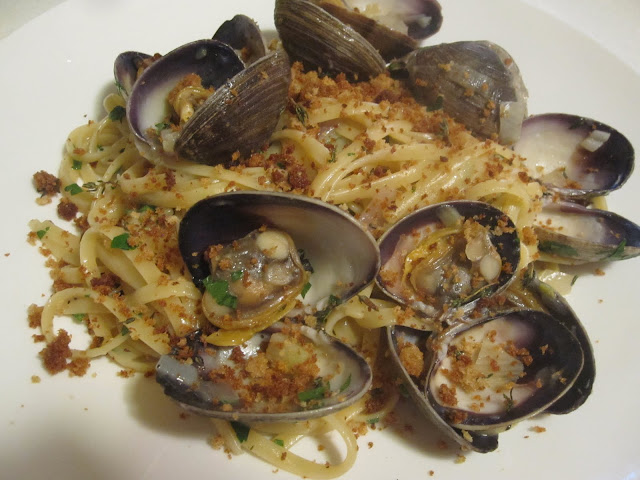 Preheat the oven to 375 degrees F.

Clean the clams by placing them in a large bowl filled with cold water for 10 minutes. Add a small handfull of cornmeal or a splash of milk to encourage them to spit out any sand. Every few minutes, give the clams a stir. Drain and return to the bowl.

Combine breadcumbs and 1 tablespoon thyme; drizzle with 2 tablespoon of olive oil. Using your fingers, toss the breadcrumbs to evenly coat with the oil. Place in the oven and bake for 8 to 10 minutes, stirring once or twice, until golden brown.

Bring a large pot of water to a boil.

Meanwhile, heat a large dutch oven over high heat for two minutes. Pour in 1/2 cup olive oil, toss in the rosemary sprig and crumble in the 2 chiles de arbol with your fingers. Let them sizzle in the oil for 1-2 minutes and then turn down the heat to medium. Add the red onion, fennel, bay leaves and remaining tablespoon of thyme. Season with 2 teaspoons of salt and several grindings of black pepper. Cook for 5 minutes, stirring often. Add the garlic and continue to cook for another 3-4 minutes until the vegetables are translucent and soft.

Once the water is at a hard boil, season with salt and drop in the pasta.

Add the cleaned clams to the vegetables and stir to coat well. Pour in the wine and cover the pot. Cook until the clams open, about 5 minutes or so. After a couple minutes, lift the lid, gently stir the clams to help redistribute the heat, and re-cover the pan.

When all the clams have opened, remove the pan from the heat and use a slotted spoon to transfer the clams to a large bowl or rimmed baking sheet. Discard any clams that haven't opened. Remove half the clams from their shells (this step may be skipped).

When the pasta is al dente, reserve one cup of the pasta water, and then drain the pasta. Return the dutch oven to medium-high heat, and add the pasta to the vegetables, tossing the noodles well. Cook 3-4 minutes to reduce the juices and coat the pasta. If the pasta seems too dry, add some of the reserved pasta water (I did not have to do this). Stir in the butter, a big squeeze of lemon juice, the sliced chile, clams, parsley, 1/4 teaspoon of salt and a couple grindings of black pepper. Toss well and taste for seasoning.

To serve, pile the pasta into a large bowl/platter and sprinkle with the breadcrumbs.

* You can play according to your tastes, but I was able to cut back on the olive oil about 30% (for example, using 1/3 cup olive oil to cook the veggies in instead of 1/2 cup). The resulting pasta was still extremely flavorful and not dry at all, so use your own descretion. At least olive oil is good for you! 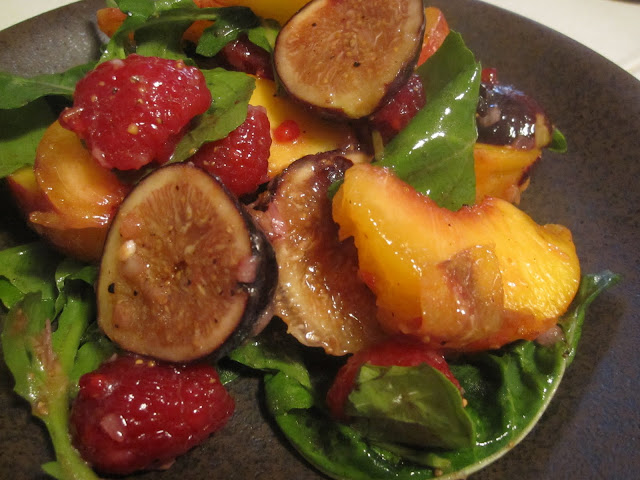 Combine shallot, vinegar and salt in a small bowl; let stand for 10 minutes. With a mortar and pestle, pound the figs into a paste. Combine with shallot/vinegar mixture. Whisk in the olive oil to make a dressing. Taste for balance. I had to add in a bit of sugar for the acidity.

Half the figs. Cut the peaches, nectaries and plums in half, remove the pits and slice into 1/4" thick slices. Combine all the fruit in a large bowl and drizzle with half the dressing, some salt and some fresh ground pepper. Toss very gently. Add the arugula, some more salt and fresh ground pepper and toss gently again. Add enough dressing to coat the fruit and arugula. Scatter almonds over (I skipped this part) and serve on a large platter.
Posted by Eleana at 8:34 AM