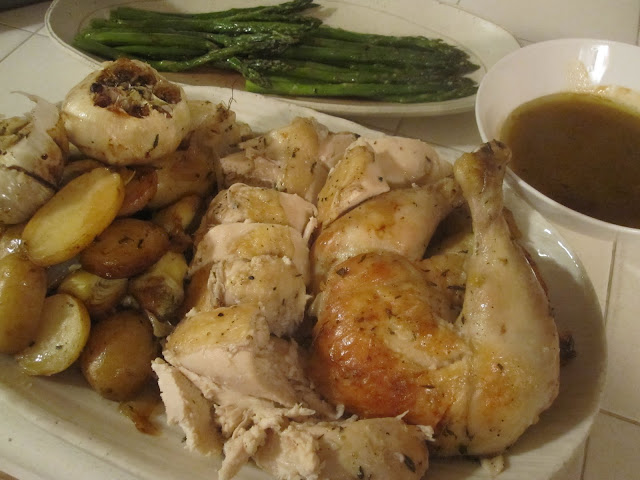 Annnd we are finally caught up. This past Sunday was the third episode of The Walking Dead. I must admit that the show is quite gory at times and I have to avert my eyes. However, rumor has it that the comic is much much much bloodier and has a lot of issues that will not be shown on TV (like a six year old murdering a newborn). I'm sure AMC will not write that part into the show.

This week, after careful deliberation, I decided to roast my second chicken. Ever. I made Thomas Keller's Roast Chicken with Root Vegetables awhile back and it was great. However, I wanted to explore more recipes, since the world of roasting chicken is so fertile with ingredients and technique. Being super excited to cook, I told my dad that I had to go to the market to buy a chicken to roast. He asked why I just didn't buy the $5 one from Costco. Wut. 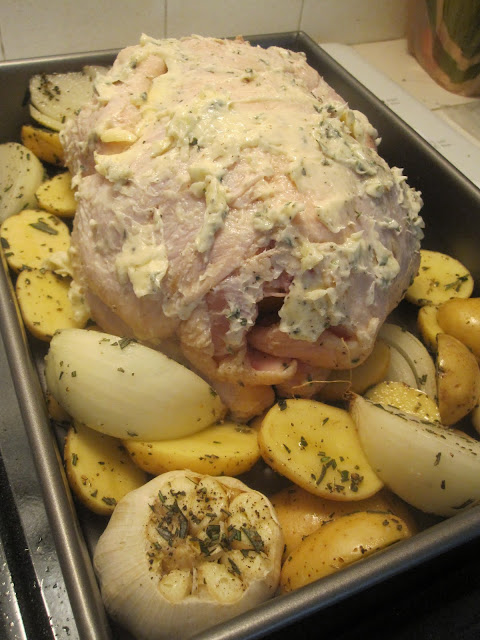 Combine thyme, a handful of kosher salt and lots of pepper in a small bowl. Liberally season the chicken inside and out to taste. Rub the bird with softened butter.

Cut the ends off 2 bulbs of garlic to expose all of the cloves for roasting. Put the potatoes and onions in a roasting pan, and drizzle with extra-virgin olive oil, salt and pepper, toss. Dress the whole cut bulbs of garlic with a bit of extra-virgin olive oil and season with salt and pepper. Press the bulbs into the rosemary leaves so that some adheres to the garlic; sprinkle the remainder over the potatoes and onions and toss. Put chicken into the pan, nestled in the middle of the vegetables. Squeeze the juice of the lemonhalves over the chicken and put the lemon in cavity of bird along with 2 large cloves of crushed garlic. Truss the chicken. Add the dressed garlic heads to the pan amongst the veggies and roast for 15 minutes at 475F. Baste the bird with pan juices, then lower the temperature 375F and roast until the juices run clear, about 1 hour to 1 hour and 15 minutes. Add the artichokes to the pan the last 20 to 30 minutes of roast time, mixing them in with the potatoes and onion.

Remove the chicken to a cutting board. Let rest for 10 minutes and then carve. Arrange the chicken on a serving platter along with the potato mixture. 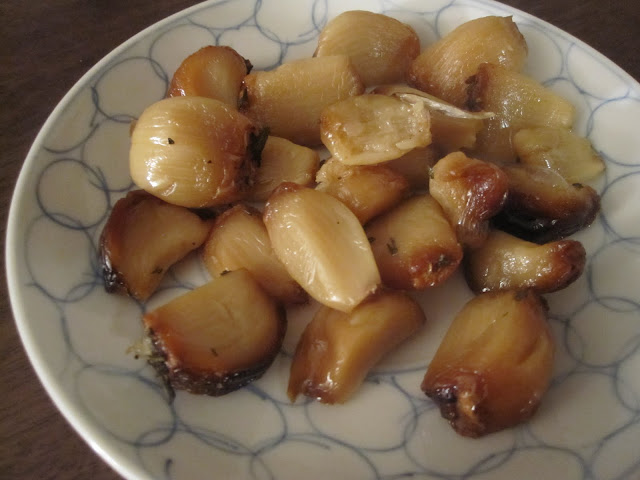 I have no idea why it has "roasted garlic gravy" because there was no gravy made. However, as the chicken was resting, I cranked the oven up to 450F and roasted asparagus for 10 minutes. Then I removed allthe vegetables from the roasting pan and skimmed off as much fat as I could, to make gravy. We ate the soft roasted garlic cloves with the carved chicken but they were not incorporated into the gravy.
Posted by Eleana at 1:08 PM

Email ThisBlogThis!Share to TwitterShare to FacebookShare to Pinterest
Labels: chicken, The Walking Dead