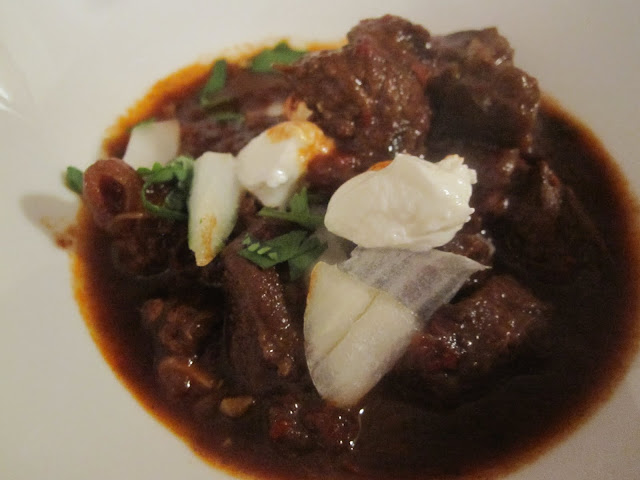 One more week until the mid-season finale! The barn!! I hope you know what I am talking about ... this show is great.

Since there were rumors that we would have rain all weekend, I opted for comfort food. The weather guys predicted rain on Friday night, all day Saturday and Sunday with a thunderstorms. I think it rained for a few moments on Saturday night and then every other minute of the weekend was gorgeous. Shouldn't we have better weather predictions now that we're in 2011?

What better comfort cold weather food is there than chili? It's comforting, hot, spicy and delicous. Plus, you can garnish it to your specifications. The one I opted to make was just straight chiles, beef and a bit of onion. No beans or any filler. Boyfriend said that was how chili was supposed to be. Try hitting up a Mexican market for the chilis (Valumart or Los Toros Meat Market are close to SGV/Pasadena). If you're truly desperate, you can go to The Spice Station in Silverlake, but you will definitely be paying a major premium. These are the seven chiles being used: 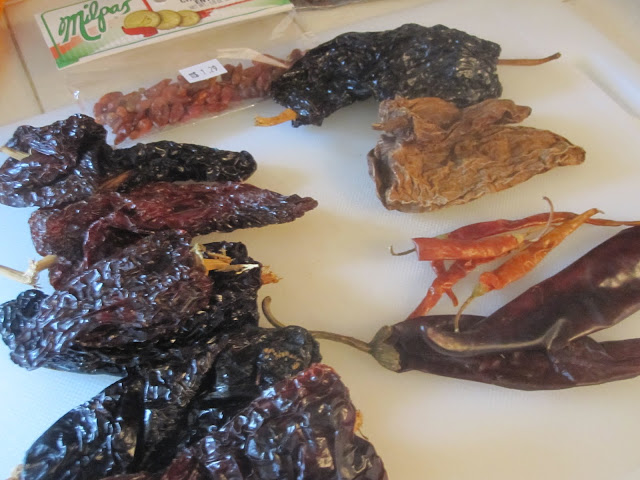 And here are all the chiles after I removed their stems and seeds, which took a lot longer than I thought. Definitely try to keep the dry chiles from cracking and breaking when you are seeding them; it takes a delicate hand. Also try not to inhale too deeply or touch your face with your hands. OMG IT BURNS!! 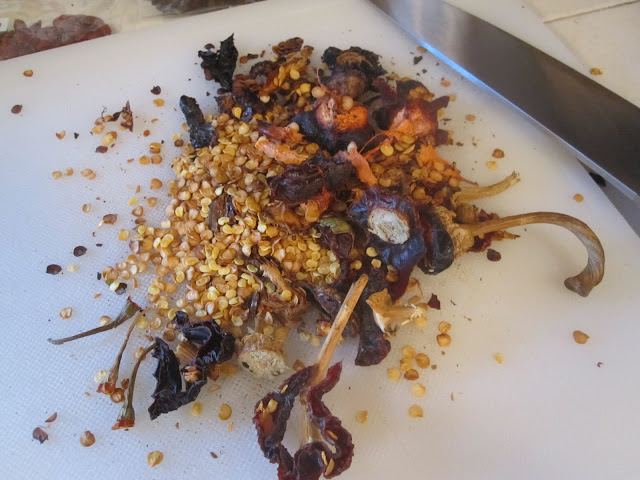 Remove the seeds and stems from the dried chiles. In a dry skillet heated on high, toast the ancho, pasilla, guajillo, chipotle, and chiles de arbol (all chiles but the pequin) on each side for 10-15 seconds. Fill the skillet with enough water to cover chiles. Let the water begin to boil and then turn off the heat and soak the chiles until soft, about 30 minutes.

Meanwhile, in a large, heavy pot such as a Dutch oven, fry the bacon on medium heat. I didn't use the bacon, but just threw in a tablespoon or so of bacon fat that I had in the fridge (yea you read that right, I have a tupperware of reserved bacon fat chillaxing in my refrigerator). When most of the fat has rendered, remove from the pan. Leave the bacon grease in the pot, and add about 1/3 of the beef. Cook on each side until lightly browned, about 10 minutes. mkae sure you don't crowd the pan, as you want to get a good sear in the meat. Remove the browned beef from the pot onto a plate.

Leaving the heat on, add the diced onions to the pot and cook until translucent, about 5 minutes, using the onions to scrape up the browned beef flavor bits on the bottom of the pot. Add the garlic and cook for another 30 seconds. Add the beef back into the pot, crumble in the bacon, and add the coffee, beer, cumin, oregano, cinnamon, clove, allspice, cayenne, chocolate, 3 cups of water, and salt. Turn the heat up to high.

While the pot is coming to a boil, make the chile puree. Drain and rinse the chiles then place them in a blender along with the pequin chiles and 1 cup of fresh water. Puree until smooth, then pour the chile puree into the pot.

When the chile begins to boil, turn the heat down to low and simmer uncovered for 5 hours, stirring occasionally. Taste it once an hour and adjust the seasonings. If it starts to get too dry, add more water. After 5 hours, scoop out 1/4 cup of broth out of the pot and combine with the masa harina. Pour the masa harina mixture into the pot and stir until the chili is thickened. I skipped this step, as the chili was plenty thick enough. Let the chili simmer for another 30 minutes or so. When done, serve with your preferred garnishes. 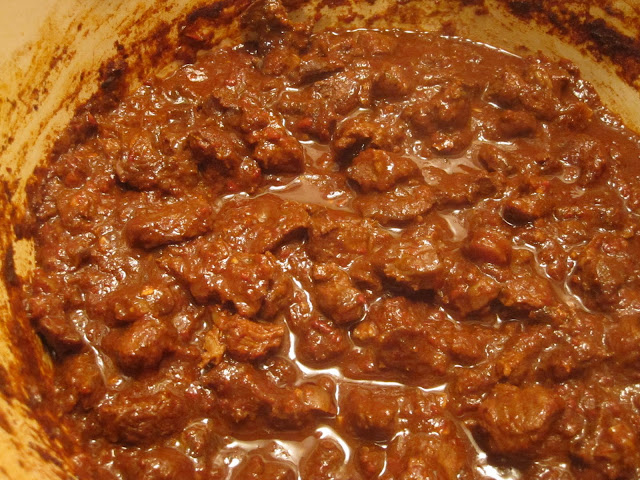 Mmm so thick and meaty! Even though so many chiles are presented, the chili was less spicier than I thought it would be. I wish there were more people around to eat it. I managed to get a bowl of it down before it was too spicy for me, but I'll admit I'm a wuss when it comes to spicy foods. Boyfriend actually added extra Tapatio to his. We finished with dessert ... 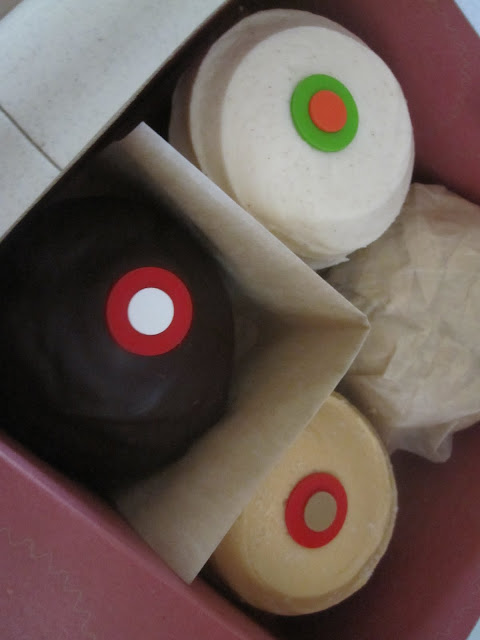 Sprinkles cupcakes! Chocolate marshmallow, salted caramel and pumpkin. They're not generally my favorite but I wanted to try the salted caramel flavor-of-the-month. They weren't bad but there was a bit too much frosting on them, and I couldn't scrape some off like I usually do since the sea salt was sprinkled across the top of the forsting. I wish they would use 1/3 less frosting - then they'd be the perfect cupcakes.
Posted by Eleana at 3:30 PM