It shames me to say that I've never roasted a chicken. Ever! I don't know why either - every writer out there says its the easiest thing. Simply season, truss and bake. Bam! An entire roast chicken, which could probably feed me for a week.

Of course, for my first, I had to start out with the best. The best being the best chef of them all, Thomas Keller. Now, you may have different opinions on whether he is THE best chef, but there is no denying that the man is something of a genius. Though I haven't had the opportunity yet to go to The French Laundry (someday ... someday), I have gone to the Bouchon locations both in Beverly Hills and Las Vegas, and the food was simply divine. Boyfriend claims the steak frites is the best steak he has ever eaten, and he likes his meat (har har). I marvelled even at how well selected and beautiful the market lettuces were in the salads, how the colors shone like gems and were perfectly dressed ... but I digress. This is all about Thomas Keller's Roast Chicken with Root Vegetables. His Ad Hoc roast chicken, to be exact. Mr. Keller has a very exact and specific recipe.

First, you take the chicken out and let it come to room temprature for an hour to an hour and a half (to ensure even cooking - see, it's already genius!). While this is happening, prepare all the veggies and google "how to truss a chicken". Read 15 descriptions and watch 4 videos on how to do it. Freak out slightly. Dry the chicken as best you can. I also cut away the big chunks of skin that flapped over the ... chicken cavity opening. I was worried that it would make the veggies underneath a bit too greasy. Once everything is trussed, flavored, peeled, chopped, and buttered, you get this beautiful masterpiece: 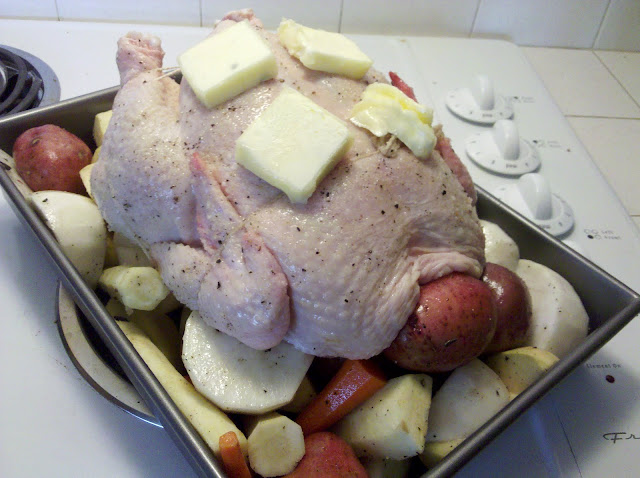 But once that is roasted for over an hour, you get THIS beautiful masterpiece: 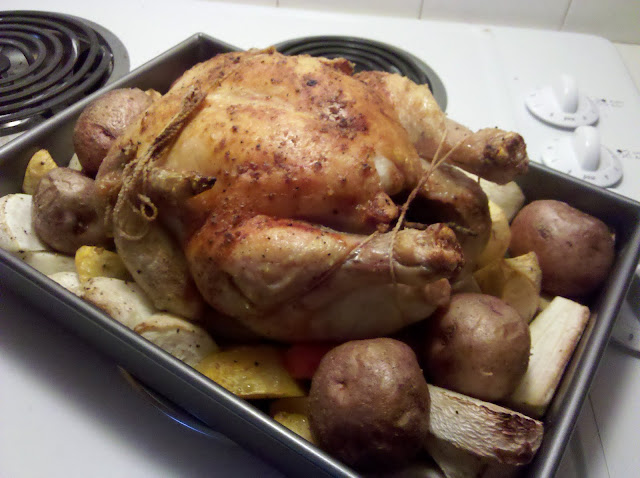 This, dear readers, is a thing of beauty. Granted, I think I need a bigger roasting pan because not all my veggies were 100% softened and carmelized the way they were supposed to. But I think it is also because I didn't follow the exact directions to find "golf ball sized red potatoes." I tried, but it's been a long time since I've mini-golfed damnit, and I think I misjudged how small a golf ball actually is. Don't make my mistake! Hopefully your veggies will come out softer than mine. When I first poked my chef's knife to carve the chicken, the skin actually crunched. Crunched. It was one of the most beautiul sounds in the world.

Of course, after eating all the juicy, flavorful chicken we could cram into ourselves, dessert had to be somewhat healthy. Strawberries are popping up all over, and these were courtesy of my mom. 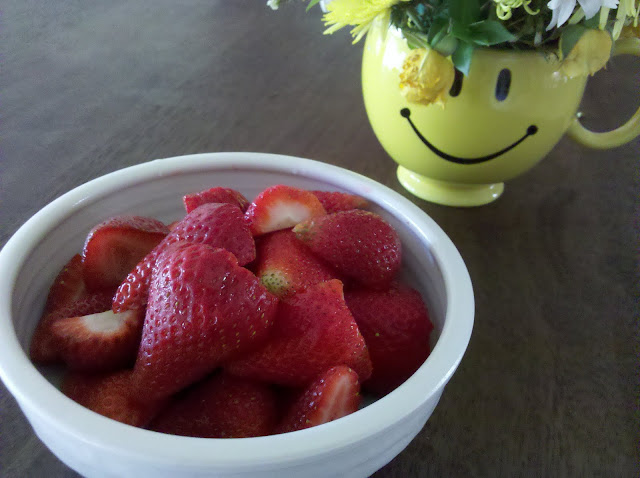 Remove the neck and innards if they are still in the cavity of the chicken. Using a paring knife, cut out the wishbone from the chicken. Generously season the cavity of the chicken with kosher salt and freshly ground pepper (I mixed up a combination in a small bowl first, then scooped out as much as I needed), add 3 of the garlic cloves and 5 sprigs of thyme, and massage the inside of the bird to infuse it with the flavors.Truss the chicken. Watch as many Google videos on this as necessary. In the end, stare down the chicken and give up - have boyfriend do it, which he does promptly after watching one video.

Cut off the dark green leaves from the top of the leeks. Trim off and discard the darkened outer layers. Trim the root ends, cutting around them on a 45-degree angle. Slit the leeks lengthwise almost in half, starting 1/2 inch above the root ends. Rinse the leeks well under warm water, trying to get all the dirt between each layer.

Cut off both ends of the rutabagas. Stand the rutabagas on end and cut away the skin, working from top to bottom and removing any tough outer layers (or using a peller, like I did). Cut into 3/4-inch wedges. Repeat with the turnips, cutting the wedges to match the size of the rutabagas. Combine all the vegetables and remaining garlic cloves and thyme sprig in a large bowl. Toss with 1/4 cup of the oil and season with kosher salt and pepper. Spread the vegetables in a large cast-iron skillet or a roasting pan.

Put the chicken in the oven and roast for 25 minutes. Reduce the heat to 400F and roast for an additional 45 minutes, or until the temperature registers 160F in the meatiest portions of the bird (the thighs and under the breast where the thigh meets the breast) and the juices run clear. If necessary, return the bird to the oven for more roasting; check it every 5 minutes.

Transfer the chicken to a carving board and let rest for 20 minutes.

Just before serving, set the pan of vegetables over medium heat and reheat the vegetables, turning them and glaazing them with the pan juices. Cut the chicken into serving pieces, arrange over the vegetables and serve.

* I also added three parnsips, which I had languishing in the fridge, as I had determined them to be a "root vegetable".
* I forgot the onion, which I am sad about because I think it would have perfumed the veggies even more.
* Yellow happy face cup was brought home full of flowers by boyfriend. Yay!
Posted by Eleana at 2:34 PM