I'm a bit behind on my The Walking Dead dinner posts. I have decided that every week that the show is on, I will cook a nice dinner. Ones that take time and patience and effort. Ones that can take up an entire Sunday cooking. Plus, I get my DirecTV on Eastern times for the cable channels, so I can watch either a 6pm showing or a 7pm showing. Just in time for dinner, with a backup episode in case my dinner making runs a bit long.

This week (or well, a week and a half ago), I dragged out my Babbo cookbook. I bought this in a frenzy of excitement a couple years ago after having the pasta tasting menu in New York. And then once I saw how obscure some of the ingredients were, I kind of stopped being motivated to cook from it. In an act of total blasphemy, I did not make my own pasta. Umm, I used leftover wonton wrappers. It's like the same thing right?! Probably not, but Boyfriend is Italian and he had no complaints. In fact, I made him right ravioli (bigger than the ones shown above; those were folded nicely but then I got tired of trying to race the clock so I just used two wrappers and filled the middle) and then he asked if there were any more. I ended up wrapping him seven additional ones - fifteen in all! Italian ravioli made with Taiwanese (ok Chinese/Asian) wonton wrappers ... this dish is a perfect marriage of each of our cultural representations. 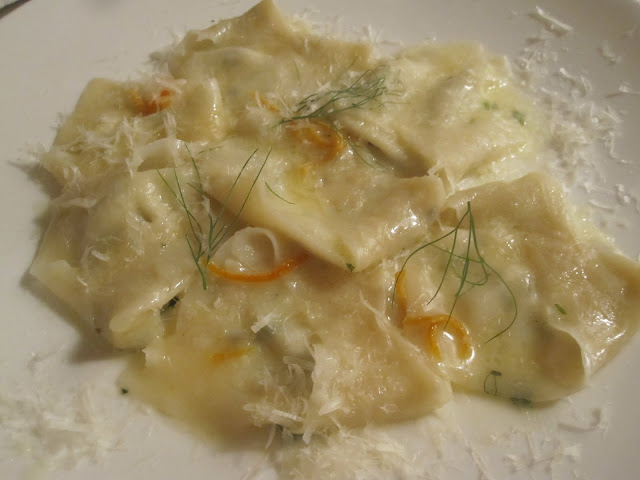 Goat Cheese Tortelloni with Dried Orange and Fennel Pollen
from The Babbo Cookbook
* I halved this recipe for the two of us; double ingredients for full recipe

Heat oven to 200 F. Place orange zest on a baking sheet and place in oven for 30 minutes to create dried orange zest.

Place 6 quarts of water into a pasta pot, bring to a boil and add 2 Tbps of salt. Drop the tortelloni into the boiling water and cook until tender, 3-5 minutes. Carefully drain the tortelloni well, reserving about one cup of the pasta water.

Meanwhile, in a saute pan, heat butter and 2 Tbps of the pasta water together until butter melts and forms emulsification. Add cooked tortelloni, fennel fronds and orange zest to pan to gently heat and coat with sauce, about 1 minute. Divide onto warmed plates, topping tortelloni with fennel fronds and orange zest. Finish with a sprinkling of fennel pollen and the remaining Parmigiano-Reggiano.
Posted by Eleana at 10:10 AM

Email ThisBlogThis!Share to TwitterShare to FacebookShare to Pinterest
Labels: pasta, The Walking Dead