One more week until the mid-season finale! Then no more zombies until Febuary 2012 ... such a long time to wait! At least this will be back on before Game of Thrones and Mad Men. Is it me or is Andrea a cuh-razy bitch? I hate her so much. Everything about her annoys me - her self-righteous attitude, her cockiness even though she totally sucks, her whining for a gun all the time even though she doesn't know how to use it, her seduction (if you could even call it that) of Shayne after she all of a sudden became a head-shot killer of zombies ... ugh. Also, girl-who-slept-with-Glenn shouldn't be going all crazy on preggers Lori and yelling at her for almost getting her and Glenn killed because they went to town for her. Isn't she the one who was defending the barn and its inhabitants to Glenn and pretending the zombies were harmless? 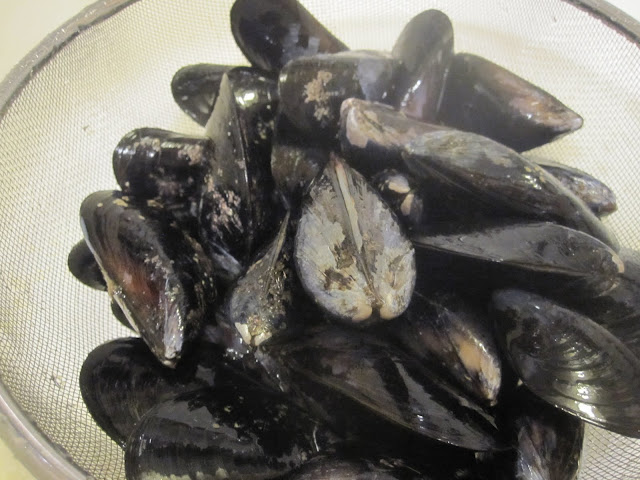 Since it was pouring rain this Sunday, I had no real huge itch to make a crazy time consuming dinner, but was still in the mood for something delicious. The Momofuku cookbook had just the thing ... Mussels with Oriental Sauce. Shortened by David Chang to Mussels with OS Sauce, beause his kitchen staff was not pleased at having to say the word "oriental" over and over in the kitchen when their boss was a Korean guy. This dish is really easy to put together, and great with a salad and bread. 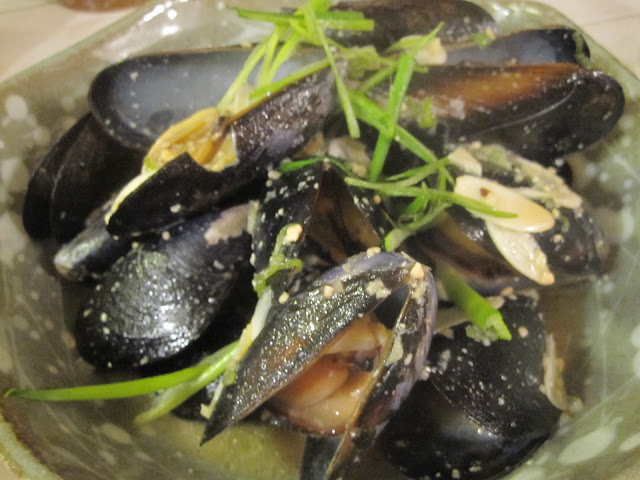 Put mussel in a large bowl and clean them by scrubbing and removing the beards. Refill the bowl with water and throw in a handful of either flour or cornmeal, to encourage them to spit up their sand. Let soak for 10 minutes, then drain and rinse well. Drain again. Discard any open/dead mussels.

Combine miso, ginger, vinegar, green onion and garlic in a small bowl. Smash together well with a rubber spatula.

In a large, wide saucepan, heat oil over high heat until hot but not smoking. Add in mussels and stir for 1 minute. Pour in sake, cover pot with lid. Steam until all the mussels have opened, about 5 minutes. Push all the mussels to one side of the pot and add miso paste, mixing to combine with the pan juices. This should happen very quickly. Toss the mussels a few times to coat with pan juices and remove from heat immediately. Discard any unopened mussels.

Ladle mussels into deep wide bowls and top with julienned green onions and a good dose of Sichuan black pepper.

* If no good mussels are available, use clams instead.
** To store mussels before cooking, pour them into a container and cover with a wet paper towel. Keep in refrigerator until needed.

We finished dinner with a good cup of Starbucks Salted Caramel Hot Chocolate, made at home for a fraction of the price! Thanks to Vanessa for sending me a picture of it from Target. It was pretty good, though of course getting one in a seasonal paper red cup just tastes different ... 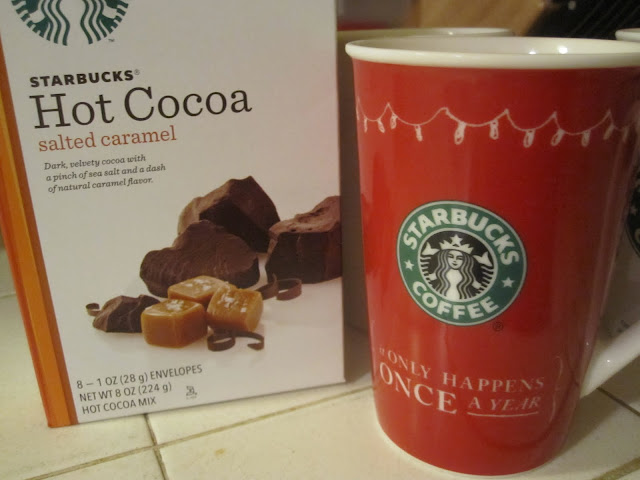 But when it's pouring outside, my own ceramic red cup will do. I'm extremely paranoid about this cup breaking (the "tall" size for ceramic red cups has been discontinued) and have forbid Boyfriend from using it.
Posted by Eleana at 1:53 PM

Email ThisBlogThis!Share to TwitterShare to FacebookShare to Pinterest
Labels: seafood, The Walking Dead