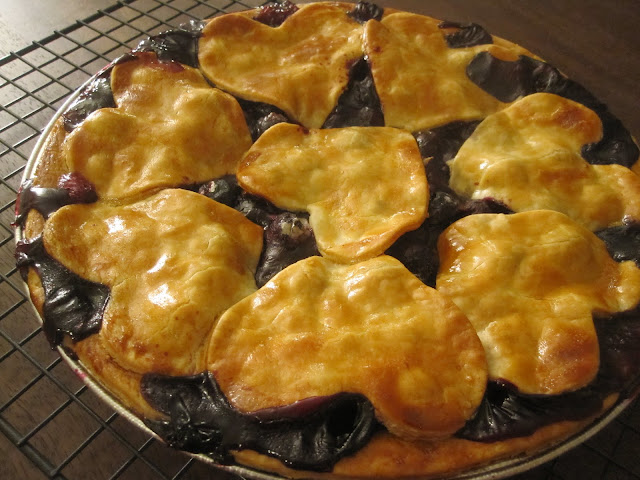 The first episode of The Walking Dead after the mid-season hiatus was a bit slow, and people were disappointed. However, I don't think the show is about nothing but gore, violence, and zombie attacks ... though there are plenty of those elements as well. Maybe I'm wrong, but I think the post-apocalyptic world brings out the person you really are - whether that's maternal, selfish, violent, etc. I'm sure Shane did portray himself the way he does now when he was a cop with Rick before the invasion started, but look at him now. And Andrea! Don't even get me started on that psycho, selfish, stupid bitch.

I had a lot of blueberries in the fridge so I decided to make a blueberry pie! For several different reasons: (1) blueberry filling looks pulp-y and gore-y; (2) they were on sale at the market a week or so back and I went a little overboard in "stocking up" on them; (3) I've never baked a fruit pie before and I know Boyfriend enjoys pie a lot. 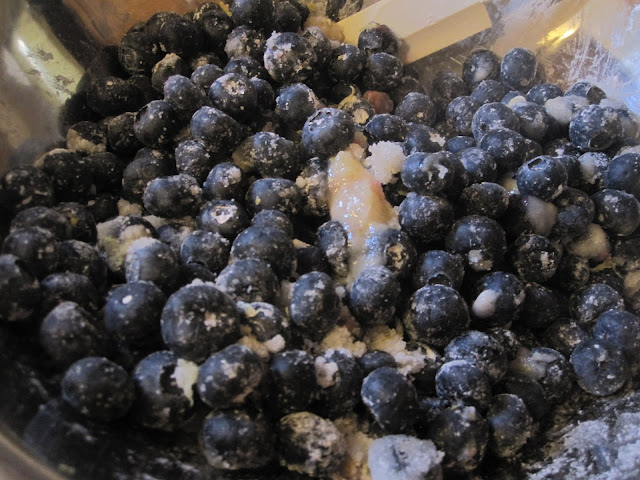 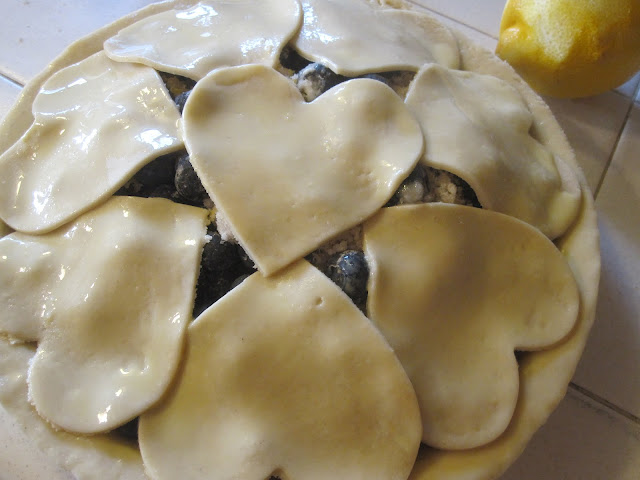 Look, instead of a lattice-top pie crust, I covered it with hearts! I felt it was very creative on my part and was very pretty. I hope Boyfriend was super impressed. He ate 1/3 of the pie straight off, even though I recommended that it cool down for a few hours first. I think he waited about 45 minutes. I'm kinda proud of myself. But dinner was not just blueberry pie ... there was also ginger soy chicken thighs and cumin-scented roasted carrots.

Heat a large skillet over medium-high heat. Add oil to pan; swirl to coat. Add chicken and cook 5-7 minutes on each side or until done. Remove from pan; keep warm. Add preserves, soy sauce, and garlic to pan; turn off the heat. Bring to a boil (it'll only take a few seconds) and stir to combine. Return chicken to pan and turn to coat with sauce. Serve over rice, making sure to get some sauce with the chicken to mix in with the rice.

** You can find ginger preserves in the English foods section of the grocery store. 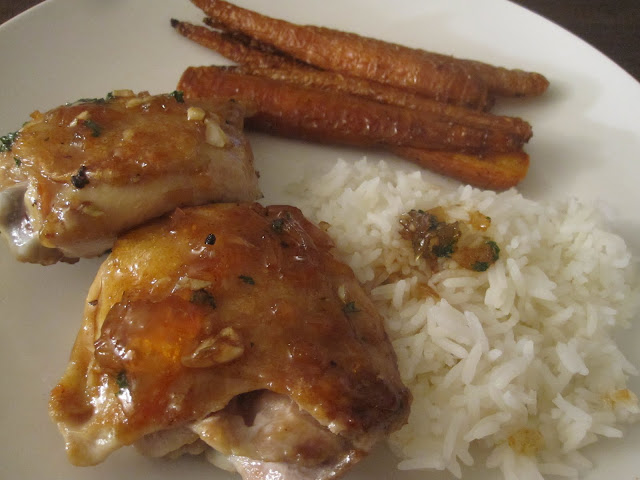 Preheat oven to 425F. Place bottom crust within the pie tin and trim to fit. Mix blueberries, cornstarch, sugar, lemon juice and zest together thoroughly in a large bowl and fill in the crust. Beat together the egg and milk. Brush the sides of the crust with the egg wash.

Cut shapes out into the top crust, whether in hearts, stars, or whatever cookie cutter shape you have. Lay them over the blueberries, making sure the pieces overlap slightly (so they stick together during baking), making sure you can see bits of the blueberry filling underneath. This way the pie can steam. Cover the top with egg wash, making sure it doesn't pool into puddles.

Let pie chill in refrigerator for 30 minutes, then remove and place on a baking sheet lined with parchment paper, to catch any fillings that may bubble over. Bake for 20 minutes, then lower heat to 350F and bake for another 35-40 minutes, until the top is a deep golden brown and the filling is thick. Cool on a wire rack for 3-4 hours before cutting/eating, to let the flavors meld together.

Between the chicken, carrots, rice and blueberry pie it was a very well-rounded meal. And we watched BOTH the Oscars and the Walking Dead - thank god for having TV on Eastern time. Didn't feel like watching Comic Book Men though; I think we're over that show.
Posted by Eleana at 9:26 AM