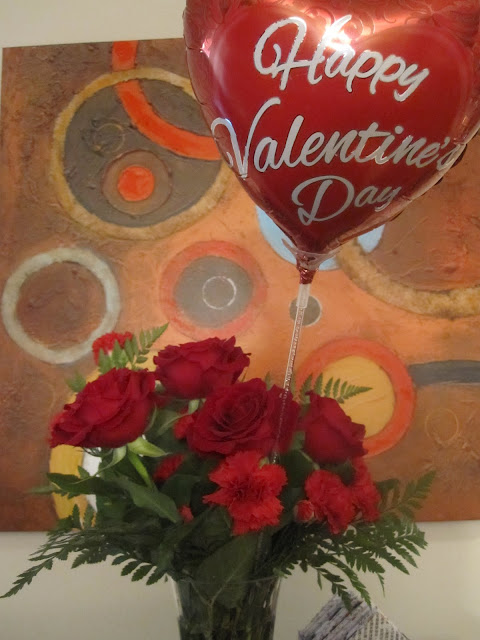 **Valentine's Day fell on a Tuesday this year, which made it a bit hard to plan something during the week. Last year, Boyfriend made me a very time-intensive dinner consisting of shrimp salad, bacon wrapped filet mignon, lobster cooked in butter, asparagus with parmesan and crème brûlée. I must admit I was super impressed and also managed to watch two movies (Toy Story 3 and Atonement) AND take a nap in the time it took him to prepare. This year, since we both worked on Tuesday, he scaled back a bit but nevertheless, it was still tasty and impressive. And he wrote this post about it. At my request. Another V-day present to me!** 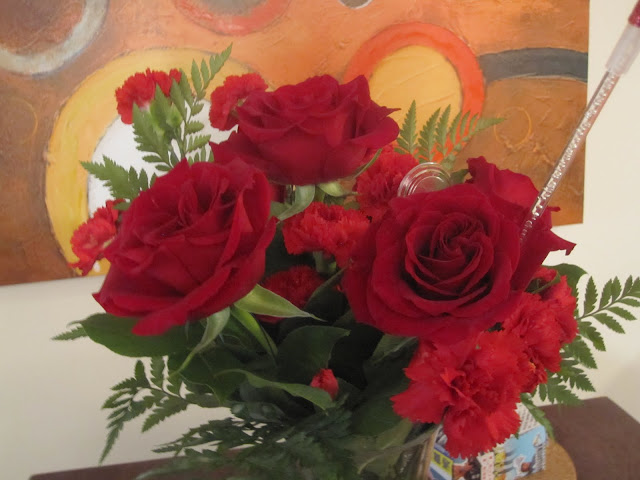 For the record, Eleana has asked me to write this blog. Sadly (for the reader mostly) I did agree however as part of our Valentine’s Day. Apparently on V-Day, for the ladies, it is the equivalent of asking the Godfather for a favor on their daughter’s wedding day. He just can’t refuse. Crap.

That being said, when you’re halfway through this, bored out of your skull and not learning anything remotely food related on an actual food blog, please direct all your scorn at her for not thinking ahead and asking a non-”foodie” to write a freakin’ food blog entry.

For normally being sharp as a tack, she really dropped the ball on this one. See, I’ve already digressed once and that was just in the first few sentences. I can just tell this will go smashingly.

As you’ve inferred from above, for part of Valentine’s Day, I decided to make Eleana dinner. Of course, the obligatory flowers and other assorted red V-Day themed items were included. I stuck with tradition there even if the color red is not part of the spectrum that is visible to me. As I am not nearly into the foodie aspect of Eleana’s obsession and normally just a lucky and willing companion on her adventures, I’m not as thorough in my knowledge of all the types of foods she normally goes nuts over. I’m a cook with above average skills, but that’s taking into consideration a large portion of average guys microwave half of their meals and pour the other half into bowls with milk (both of which I have armed in my repertoire so no disrespect to either). However, I can work my way around a stove without typically lighting things aflame.

Still, I know my limits and so when deciding on which recipes to give a go, complexity or lack thereof…major factor. Hell, last time I went and tried to make a fancy meal which included trying to make crème brûlée, it took me roughly three hours. “Hey honey, dinner will be done soon. Why don’t you pop in a movie until it is done…like the Lord of the Rings trilogy. The extended cut. Yeah…all three.” 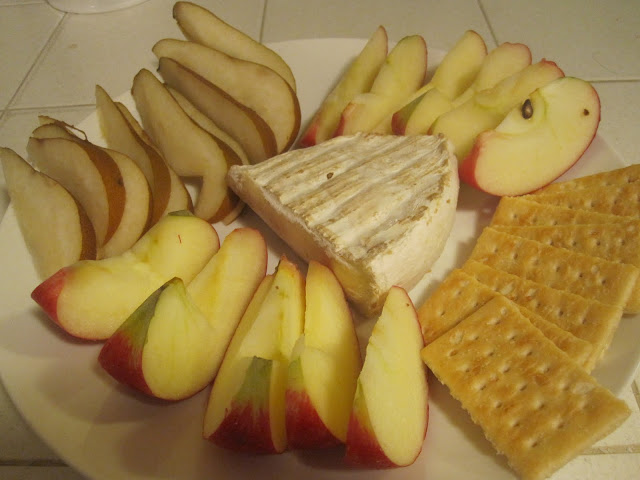 Not wanting that, I went with some basics I knew previously. First a cheese, cracker, and fruit plate. Brie, some slices of fruit and some crackers arranged very neatly on a serving tray. Sliced fruit you say? Why yes, so fancy! Yep brie and sliced fruit just screams of “class.” Ok, not really. Yeah, this plate is what we call easy filler. To be honest, I just put this out in case the meal took another marathon to make so Eleana didn’t waste away while I kicked kitchen appliances and cursed at Top Chef for making it look easy. Next, an Italian tomato side dish that my grandmother made for us when I was younger or when I go to visit her still. She’s a great, old fashioned cook. This means the food is amazing but the downside is trying to get the recipes from her. She couldn’t tell you a recipe she has because she just throws the ingredients by hand and never measures out anything…and it still always tastes the same and delicious. Learning a recipe from her, however, becomes like watching David Copperfield do a magic trick and trying to figure out how the fuck he just made your poodle disappear.

In the case of the Italian tomatoes, it is a little easier since it is pretty basic. Cut some tomatoes into slices, top with spices, olive oil, and vinegar. Done. Thanks Nana. 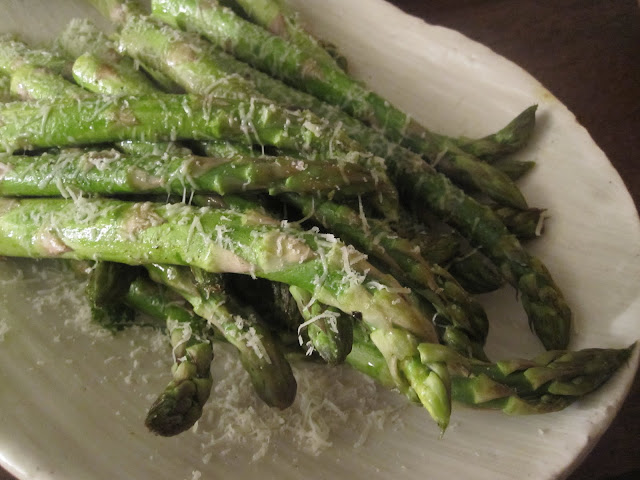 Now onto the vegetable side dish because we all know tomatoes are technically fruit, right? I’m going for asparagus (I feel like the plural of that should be asparaguses or something, but nevermind that). I chose this one since A.) Eleana likes the stuff B.) It involves cheese which is self-explanatory and C.) It wasn’t so complicated I would risk second degree burns trying to get it right while juggling three other dishes. It worked. I think. The best part, besides the parmesan cheese of course, was that I impressed myself by timing its completion along side the main dish…shrimp scampi linguini! 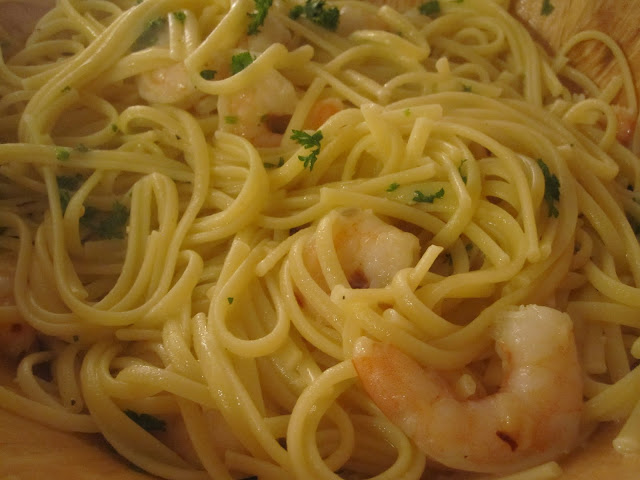 I actually got just a little more Italian by typing those words out. Not so Italian that I will be tempted to “GTL” or fist pump or anything else you learned from Jersey Shore, you damn stereotyping bastards.

So this entrée I decided was a good match for this. It was just a bit more adventurous than most recent things I’ve made since I’ve never done a scampi dish before, but not so daunting that I could do major damage to the dish or the kitchen if I attempted. I’m sure there are plenty of people who can do this in their sleep and while I am a modern day super-hero, I am not one them. Peeling shrimp? No problem. Making linguini? It’s water + pasta + time. Right off the bat, I’m comfortable with two of the three main steps. It was the third that I was going to have to make sure I didn’t screw up. This involves putting a buttload of butter in a skillet with other stuff and melting it and cooking it. Sounded…uhhh…I’ll be honest, I didn’t even think about it beforehand or during for that matter…which may be why I burned the butter the first attempt as I was just whistling away peeling shrimp and not paying attention. That’ Land-O-Lakes lady is one cruel mistress.

So, the second attempt nailed it and dammit, afterwards it tasted like…effin’ shrimp scampi linguini (the effin’ adjective does not denote any particular taste by the way, just the level of awesomeness, in case you were wondering).

So there you have it, a blog entry. About food. By a person who grades his food in two categories “Shit I’ll eat” and “Shit I won’t eat.” (Actual “shit” falls into the latter category by the way). 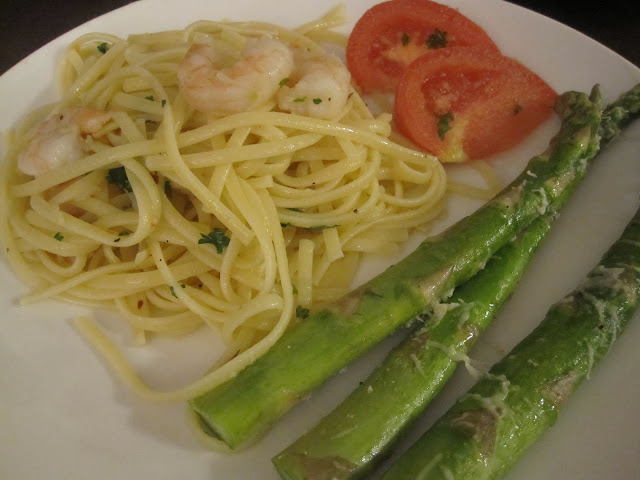