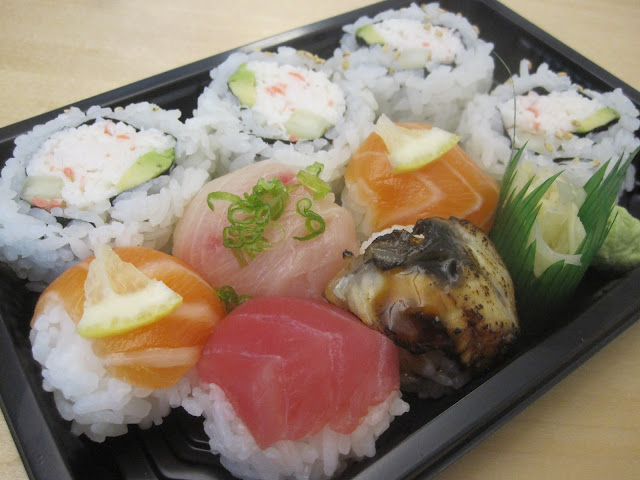 Sushi from a food truck? Come again? That's what I originally thought when I first saw Fishlips Sushi parked in Abbot Kinney. They were offering pieces of their shrimp crunch roll as samples and to be honest, it wasn't shabby. Better than what I would have gotten at some sit down restaurants like, let's say Octopus. However, I was on a mission that day to eat at the Kogi truck and Jin Patisserie, so I passed up the opportunity to have any more.

A couple years later, I noticed via my Twitter feed that Fishlips sushi was parked relatively close to my work. On a rainy day, I decided to brave the rain and give it a try. I was delighted to see that their pieces of sushi were rolled into adorable little balls. Though the rice was the slightest bit too vinegar-y and the fish-to-rice ratio was the slightest bit off (a bit too much rice), the fish was remarkably fresh; the salmon and eel were my favorites. The above California Set Combo was perfect for lunch!
Posted by Eleana at 5:30 PM