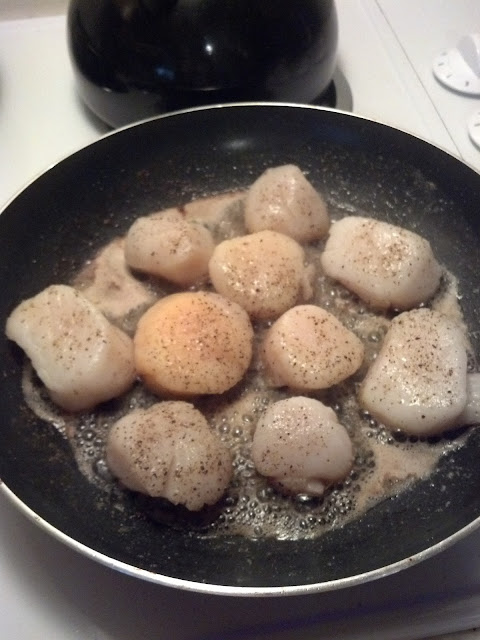 I think that I've blogged about seared scallops before buy Boyfriend is absolutely nutso about them. I went to 99 Ranch while he was at work the day before (on a Saturday, poor thing) and there they were ... fresh scallops the size of my palm. NOT PREVIOUSLY FROZEN. The sweet lady fishmonger that had previously helped me when I wanted to buy a live fish for steamed fish with soy sauce and ginger was there. She always treats me like her daughter and totally takes care of me. She went through the scallops and found the best looking ones just for me.

Sear your scallops in a combination of equal parts canola oil and butter, over high heat, seasoned with salt and pepper. Make sure that the pan isn't too crowded (mine is a bit overcrowded) otherwise the scallops will steam and you want to get a good sear over it. Depending on the thickness of the scallop, you only need to do it for 2-3 minutes per side. The very heart of the scallop should still be the tiniest bit raw.

I have to admit that scallops were a lot easier to eat during The Walking Dead ... nothing that crunched and nothing that was tomato sauce based. Not that there was too much to worry about though; this last episode was pretty boring actually. I don't need to have a zombie attack every time but I felt that this one was just pretty dragged out. Lots of talking with no direction. Hopefully the next one will be better because I'm thinking the new director from the midseason premiere is tanking quite a bit.
Posted by Eleana at 4:58 PM

Email ThisBlogThis!Share to TwitterShare to FacebookShare to Pinterest
Labels: seafood, The Walking Dead