A Craving for Steamed Fish 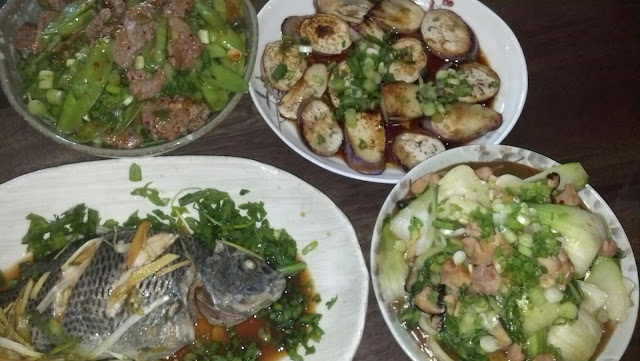 I know I had promised to update more with the last post, but things have just been so crazy lately. My dad had a birthday, and my brother, and my co-worker ... there was Book Club ... a trip to San Francisco and Monterey ... and budgets. Budgets are the bane of my existence, the one and only time at work where I'm actually crazy busy from the moment I walk in until the moment I leave. Excel spreadsheets in size 7 font are opened and my eyesight diminishes from day to day. I think I talked about this last year too.

I made the above dinner one night when I was really really craving steamed fish, Asian style. I was just going to go to 99 Ranch, have them fish one out for me (haha, get it?!), whack it until it died and then bring it home right away to steam up ... then realized that maybe Boyfriend and his Italian-ness wouldn't eat fish with the head on and he'd get grossed out. But don't Italians eat branzino?? What was I thinking. Basically out of that fear, I made the three other dishes to go with it, just in case. As it turned out, I didn't have to worry because he scarfed as much fish as he could. And poured soy sauce on his rice (from the bottle, not like, using the soy ginger onion sauce with the fish - that would have been acceptable) ... I have such a long way to go in teaching him not to do that.

Steamed Whole Fish with Ginger and Scallions
adapted from Epicurious

Clean fish by removing the guts (the fishmongers at 99 Ranch will clean and scale if for you, but only if you ask them to). Using sharp kitchen shears, cut off the top fin and side fins. Rinse fish and pat dry, then rub inside and out with salt. Transfer to baking dish and sprinkle with scallion strips (white and pale green) and ginger.

Stir together soy sauce and sugar until sugar is dissolved, then pour over fish. Add enough boiling-hot water to roasting pan to reach halfway up side of baking dish. This is the same concept as doing a water bath when baking cheesecake. Oil a large sheet of heavy-duty foil, then tent foil (oiled side down) over fish and tightly seal around roasting pan. Carefully transfer roasting pan to oven and bake until fish is just cooked through, about 30 to 35 minutes. While fish bakes, cut enough scallion greens diagonally into very thin slices to measure 1/2 cup.

Just before serving, remove foil from fish and transfer to a serving platter. Sprinkle with the cut scallion greens. Heat wok over high heat until a bead of water vaporizes instantly. Pour oil around side of wok, then tilt wok to swirl oil, coating side, and heat until smoking. Remove from heat and immediately pour oil over scallion greens and fish. Make sure you stand back to avoid being splashed the hot oil, and it will hiss like crazy! Don't be scared. (I didn't do this last part because I had too many things going on, but I've done it before and its delicious.)

Whisk the chili-garlic sauce, soy sauce, mirin, honey, sesame oil, and cornstarch together in a small bowl and set aside. While half frozen, cut the beef lengthwise along the grain into 3 or 4 (2-inch) wide pieces. Slice each piece of beef across the grain into paper thin pieces, about 1/8-inch thick. Doing this half frozen will give you the thinnest cuts. Pat the beef dry and season well with salt and pepper.

Heat 1 Tbsp of the oil in a medium nonstick skillet over high heat just until smoking. Add the beef and cook, stirring rarely, until well browned, about 4 to 5 minutes. Set aside.

Return the skillet to the stove over medium-low heat. Add the remaining 1 Tbsp of oil, 2/3 of the scallions, the garlic, and the ginger, and cook until just fragrant and starting to color, about 30 seconds. Stir in the snow peas, and cook, stirring occasionally, until bright green, about 2 minutes. Whisk in the chili-garlic sauce mixture, then remove the pan from the heat, and add the beef and accumulated juices. Toss to coat and sprinkle with remaining scallions.
Posted by Eleana at 12:17 PM