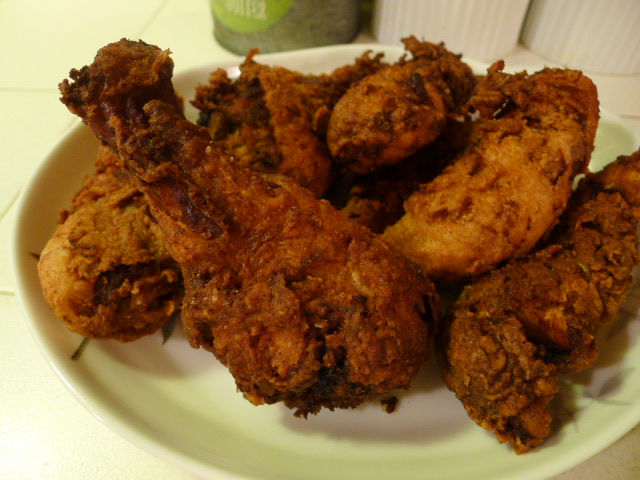 So generally, I go pretty all out for meals during new The Walking Dead episodes. I find a recipe that's pretty time consuming, plan it out, practically come up with a timeline to schedule everything to be eaten at 6pm (we have DirecTV in Eastern time, so we get to see new episodes first!) and get super excited. Never, ever have I asked Boyfriend what HE wanted. Because who cares, right? Happy live-in-girlfriend, happy life. Or something like.

This time, however, I asked if there would be anything he's interested in me making and he responded with "fried chicken" ... my jaw almost hit the floor. Fried chicken is nothing to scoff at. nor is it easy. But my mind immediately went to a Thomas Keller Ad Hoc recipe. 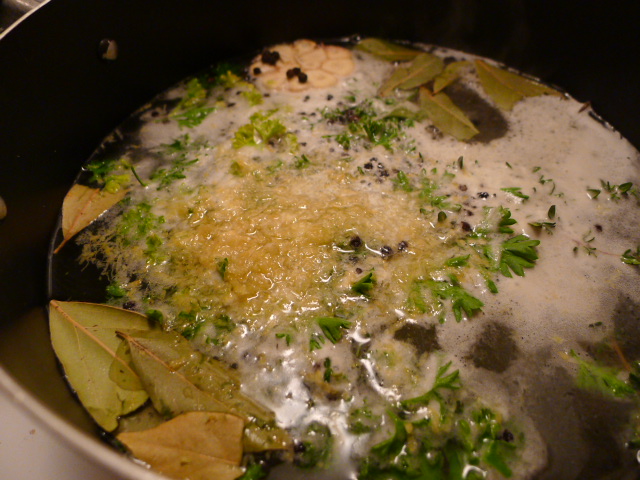 brining. so much brine. 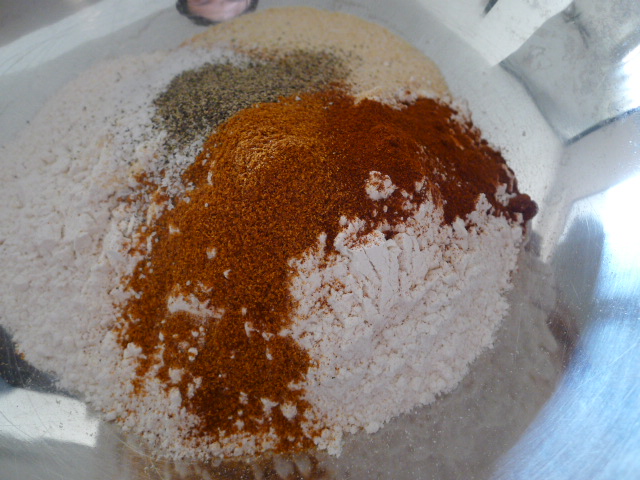 Colonel Sander's herbs and spices have nothing on Thomas Keller's!

A lot of prep work came with this chicken ... but super easy. Mainly, chicken had to be brined about 12-24 hours ahead of time, then rinsed and dried, and then left to sit out for 1.5-2 hours, to get to room temperature. This ensures that the outside of the chicken won't cook faster than the inside, leaving you with a burned exterior and a raw interior. 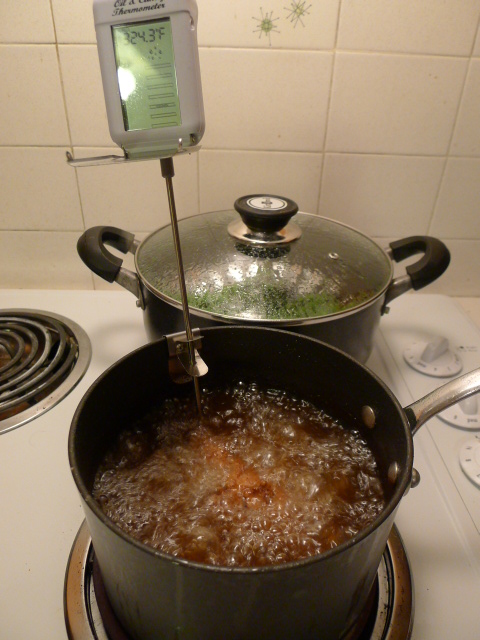 When Vanessa asked if I was going to fry in my new Le Creuset cast iron pan (Christmas present!), I told her no ... I was going to deep fry! She then asked "Oh cool, you have a deep fryer?" and I said "Nope, I'm just going to fill a pot with oil" ... she then proceeded to tell me how to put out a grease fire. Smother the flames, don't throw water on it!

With the help of a trusty candy thermometer, I got the oil heated and bubbling to a nice 320degreesF and started frying away. It was a great experience and though the oil bubbled and hissed super loudly, I did not get burned in the slightest. 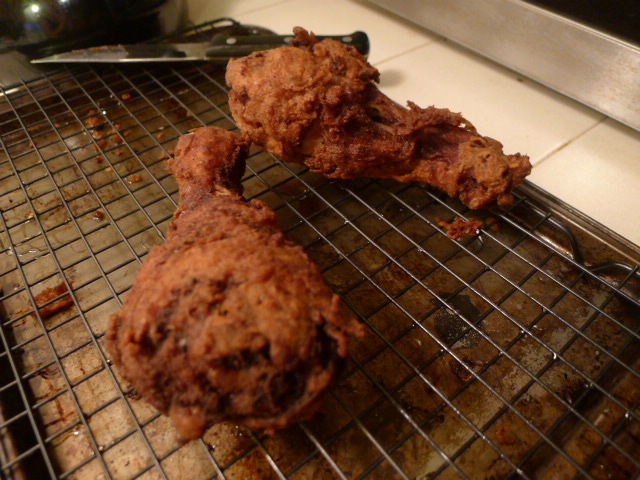 nicely browned chicken. probably due to the spices and buttermilk. 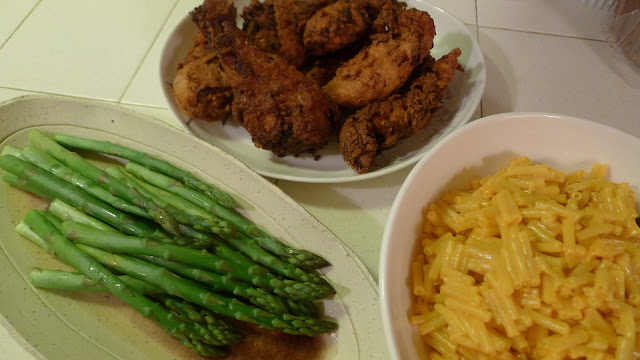 The chicken came out moist and flavorful, if a tad bit salty. Maybe less brining next time? I brined for a total of 20 hours or so, maybe I should cut that down. Boyfriend didn't think it was salty though, and proclaimed it was "one of the best things [I've] ever made" ... always nice to hear. The skin was so crisp and amazing that there were audible crunching sounds when you bit into it ...

Which leads me to the new The Walking Dead episode. I must admit, the crunching from the chicken while watching zombie bashing is seriously a bit unnerving. This week's episode was a bit slow ... and I dislike Dead Lori coming back to haunt Rick some more. Come on, woman! Just leave him alone and let him lead his people. From the trailers, it looks like next week, Rick will have a mutiny on his hands. And the Daryl/Merle abandonment didn't last very long, huh? Actually, the episode was slow ... until the very end. RIP to the best mustache on television. *sad face*

Count your hours down and start making the brine. Combine all the ingredients in a large pot, bring to a boil, and boil for 1 minute, stirring to dissolve the salt. Remove from the heat and cool completely before adding the chicken in. It takes about 1-2 hours.

Rinse the chicken pieces and place in the cold brine. Refrigerate overnight or for 12-24 hours. When ready to cook, remove the chicken from the brine, rinse and pat the chicken dry, removing any herbs or spices sticking to the skin. Let the chicken come to room temperature outside of the fridge, about 1.5-2 hours.

Mix the coating ingredients together in a bowl, transfer half to another second and set up a dipping station for easy assembly while battering: chicken, coating, buttermilk, second bowl of coating, tray.

Bring the oil to 320degreeF in a pot deep enough that the oil does not come up more than 1/3 of the way; make sure you have about 2 inches of oil so the chicken piece can submerge fully. It took almost an entire bottle of oil for me to get this, and I just used a medium saucepot (see picture above). If you have a deep fryer then feel free to use it but the saucepot method worked pretty fabulously.

Right before taking the chicken into it's hot oil bath, dip each piece into the coating, patting off the excess, then into the buttermilk and then into the second bowl of coating. Place the chicken onto the tray. I did this in batches, so while one batch of chicken was almost done frying, I'd coat another batch.

When the oil has reached the proper temperature, carefully lower the pieces of chicken into the oil. The temperature of the oil will decrease, so adjust the heat as necessary to bring the oil to proper temperature. Fry for about 13 minutes for the drumsticks, to a deep golden brown, cooked throughout and very crisp. The white meat chicken tenders took about 8 minutes.

Remove the chicken to a wire rack with a baking sheet underneath, so the oil can drip down and the skin won't become soggy. Alternatively, you can just transfer the chicken to a tray lined with paper towels, if you have no wire rack. Sprinkle with coarse salt (optional, I didn't do that).

Let the chicken rest for a few minutes to cool slightly. Be careful biting into it! Eat fried chicken until you explode.
Posted by Eleana at 10:21 PM