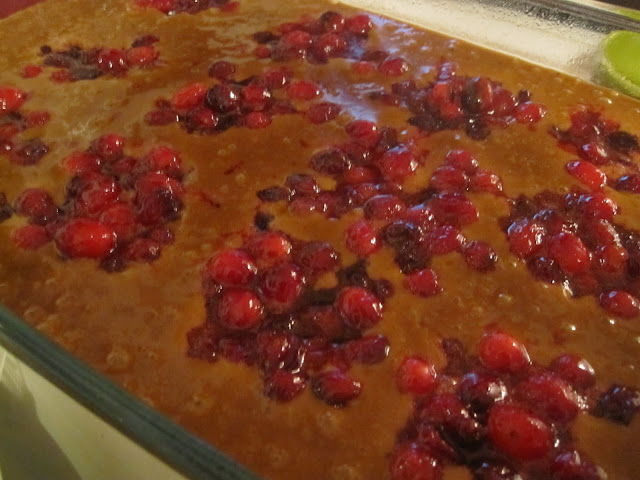 I love the spices in gingerbread, but don't like gingerbread men/women/children/people due to the crispiness of the cookie. I've never had one that I've found to be satisfying, and generally am disappointed at the first bite when it crumbles in my mouth.

However, gingerbread in bread/cake form is an entirely different story. I found this recipe online after discovering two bags of cranberries still languishing in the fridge. There were huge sales for Thanksgiving and I couldn't resist buying them, though I had only used one bag for cranberry sauce. Now with one bag used and one still left in the freezer, I can make this sticky-pudding-like gingerbread in the summer and imagine it is the holidays again. 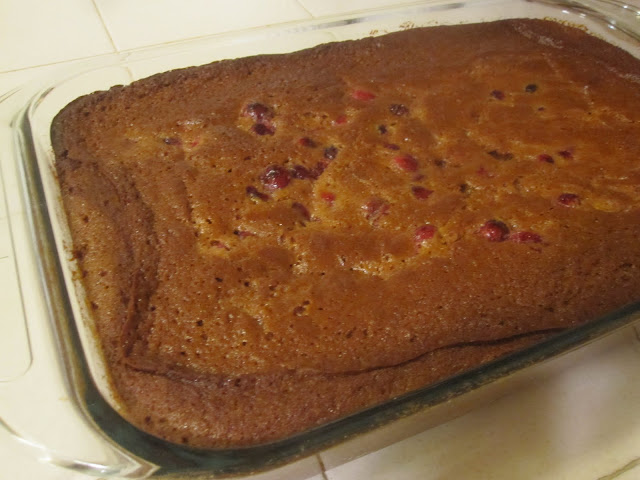 Preheat the oven to 350 F and spray a 9-inch-square baking pan with non-stick cooking spray.

In a small saucepan, stir together the cranberries, granulated sugar, and water. Stir the cranberries over medium heat until the sugar is completely dissolved and the cranberries form a sauce, about 10 minutes. Make sure you stir and don't just leave it there to do something else, as you don't want the sugar to burn into the pan (see below). You want about half of the cranberries broken down; essentially you are making cranberry sauce.

In another saucepan, stir together the butter, brown sugar, milk, molasses, and golden syrup over medium heat. Bring it to just barely a simmer and remove. Do not let it boil.

In a large bowl, sift together the flour, ginger, cinnamon, baking powder, salt, baking soda, and pepper. Beat in the butter-molasses mixture with a rubber spatula. Beat in the eggs and then the ginger.

Pour batter into the pan. Drop dollops of cranberry sauce onto the surface of the cake batter, like in the picture above. Drag a knife through and around the batter in swirls, to help spread the cranberries. Bake until a toothpick inserted in the center comes out clean, about 50 minutes. Cool completely on a wire rack. 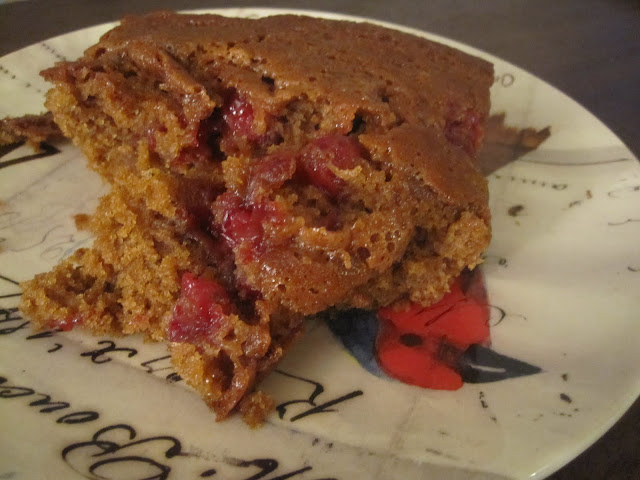 This cake tasted like Christmas! I was definitely pleased with how gingery and spicy it turned out. Perfect on the couch with a cup of coffee or tea. I think Boyfriend ate 1/4 of it right off, but it's almost a week later and the leftovers are still nice and moist. The sugar syrup from the cranberry sauce settle into the bottom of the cake and becomes sticky, almost like a caramel sauce. I cut slabs for my datacenter manager, brother, Vanessa and Hanna; I wonder how they liked their pieces.

I tweaked the recipe a bit too since I decided to make it so last minute; there weren't all the ingredients called for. I substitued golden brown sugar for the dark bown sugar, defnitely honey for the golden syrup and used half heavy cream and half skim milk instead of whole milk. Since I was tired, I basically eyeballed the spices and grated ginger - everything still came out fantastic. Also, no need to use and dirty the KitchenAid mixer, which is especially helpful when I'm baking on a whim.

And yes, I burned sugar into the bottom of my saucepan. As in, hard and browned around the edges, and stuck like crazy. I finally Googled "how to remove burned sugar from a pot" and got rid of it. I'll tell you here just so you don't have to Google it yourself. Put enough water in the pot to cover the burned sugar area. Add a couple drops dishwashing liquid and boil over high heat. While it is boiling, use a steel/metal spoon to scrape the sugar until it dissolves and comes free. It will steam like crazy due to the boiling, so make sure not to burn your hand while scraping. If you can find a long spoon, like the kind you use at Korean tofu restaurants, it would be best (as opposed to the shorter regular soup spoons).
Posted by Eleana at 2:22 PM