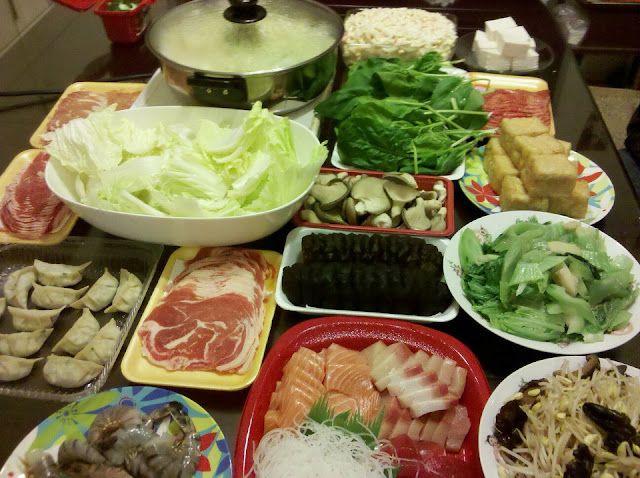 Happy Chinese New Year! I say that even though more than just the Chinese celebrated yesterday as the start of the Year of the Dragon. I suppose the politically correct thing to say would be Happy Lunar New Year. And apparently it is supposed to be a very prosperous year as well. People are already planning and gunning for babies to be born this year. No babies for me, please.

We gathered at my parent's house (mah and bah) for New year Eve dinner. My mom likes to do hotpot. I've totally gotten Boyfriend turned on to hotpot, but he dislikes it at my parent's house. My mom makes stock from sctrach using prok bones (good) and there is a huge variety of items to cook (also good) but she likes to pre-cook a lot of the items beforehand (bad). So when you go to the table, in addition to everything shown above, the hotpot pot is already full of different kinds of fish balls, pork balls, shrimp balls, tempura, napa cabbage, firm tofu, fried tofu, fish cake, etc. This way, not much meat can be eaten until we kind of clear out the pot first. I tell her every year to just let us cook at the table, but she can't let the pre-cooking go.

In addition to the hotpot, we also do some traditional things. Like play mahjong! My dad has been playing since he was a kid and taught my mom after they got married. And man, my mom is an addict. She has a computer mahjong game and she plays every night. Most of the time, my dad can still destroy her (and all of us) pretty easily. He also talks mad hilarious shit during the games and is so good that most of the time he can see what's on the table and watch your moves to kind of determine exactly what tile(s) you need to win - you know, so he can withhold it. This year though, I did really really well. Brother maintains that I "don't really know how to play and I'm just lucky" but I think he just underestimates me over and over. I won $60; my mom ended up going on a crazy winning streak in the end and won like $100.

And of coure there are red envelopes. Married couples are supposed to give them to children, or basically anyone unmarried. My friend Vanessa gave me one because she is older than me (by one day!) but I don't think I have to hand any out until I get hitched. My mom tells us that she had an aunt that was never married, so she was still collecting red envelopes into her fifties. Man, that's living the life. When I was younger, some of my friends would literally collect hundreds of dollars - some almost a thousand every New Year.

Added to all the money exchange, there are reasons for eating this thing or that thing on the table. I'll try to explain them as much as I can.

Fortune Veggies (bottom right hand corner) - Back in the olden days, women used to carry some jades that are shaped like those bean sprouts with the large yellow head/bean at the top. Eating this every lunar new year will ensure that all your endeavors (eg businesses, relationships, work, etc) will go smoothly and in your favor.
Mustard Greens (bottom right hand corner, above the Fortune Veggies) - When left whole, mustard greens are shaped like a certain kind of jade. They symbolize fortune (in Chinese, they are called fa, which means fortune) and will bring a prosperous year.
Fried Whole Fish (not shown) - Fish symbolizes that you will have food and enough to eat for the entire year.
Steamed Rice (not shown) - Make a pot of steamed rice and everyone has to eat some. However, you are never supposed to finish the rice. This symbolizes that you have enough food to carry you over into the next year, and that you're not depleting everything you have.
Dumplings - Whether handmade (we had pork and leek this year made by Lynn) or store bought, dumplings are shaped like coin purses or gold ingots. To me, they are kind of shaped like traditional chinese hats. Anyways, they also represent fortune for the new year.
Sticky Rice Cakes (nian gao) - In Chinese, it translates into "year" and "tall", which means that they are also eaten for good luck and for kids to grow. We didn't have them this year.

Traditionally, you are supposed to pray at midnight or go to the temple, and then sleep at your mother's house. It is the one night of the year where a mother is supposed to have all her children under one roof, especially when they go off and get married, etc. However, a 5:3-am wake-up time ensured that I was NOT going to be staying up until midnight. The family prayed a little after 8pm and I went home. It was a good night!

Email ThisBlogThis!Share to TwitterShare to FacebookShare to Pinterest
Labels: Chinese