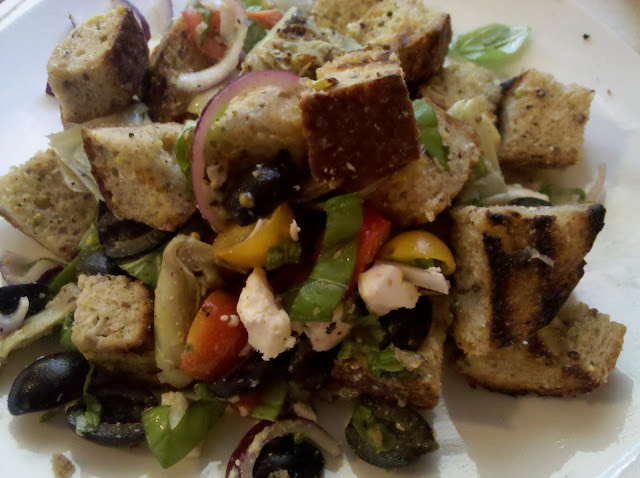 Panzanella sounds like it could be just about anything (a band, a brand of yogurt, a disease) but it's basically an Italian bread salad with tomatoes, basil and various other items. I say "various" because the only things really required are bread, tomatoes and basil. Everything else added is whatever else the maker fancies. I grilled the bread for the one I made yesterday, but I think next time I'll just toast it in the oven. Turning all those pieces of bread over gave me the beginnings of what I think is carpal tunnel, or at the very least, a mild stress injury. Because I was at Trader Joe's, I used their whole grain wheat bread and baby heirloom tomatoes.

Cut the bread into 1 inch cubes and combine with artichoke hearts. Drizzle with olive oil, salt and pepper. Preheat a grill pan over medium-high heat and grill bread and artichokes until lightly browned. In the meantime, whisk togther olive oil, vinegar, salt and pepper in a bowl; set aside.

In a large bowl, combine tomatoes, olives, red onion and feta cheese. When bread is finished grilling, pour into bowl and toss to combine. The heat of the grilled bread will bring out the flavors. Drizzle with dressing and basil. Toss well and serve as a side or a main course (add salami if necessary to round out as a main course).
Posted by Eleana at 3:36 PM

Email ThisBlogThis!Share to TwitterShare to FacebookShare to Pinterest
Labels: salad