Hello! Back from hiatus! Hi there! With a good explanation too. Budget time. If you are responsible for any sort of budgeting, I feel for you. It is easily the worst time of the year at work. People are on stressed/snappy, there is little to no guidance (though this year has been better than years prior), stupid accounting systems that don't update in real time (what's the point of having a platform that only updates once every TWO HOURS?!) and people staying at work until 4am. No joke. 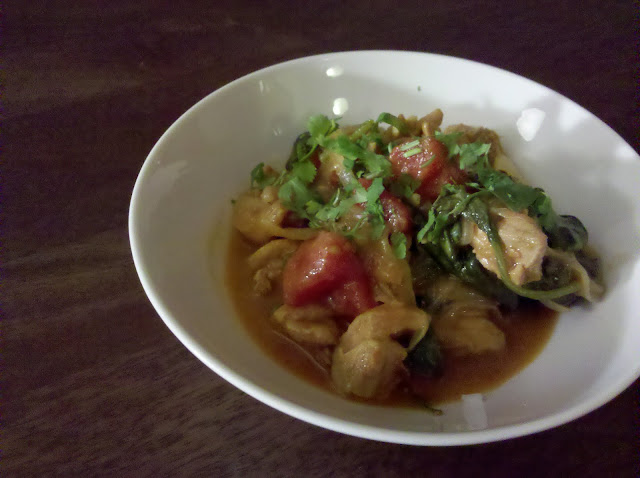 In the midst of all this, I managed to make a curry with no cream or coconut milk or block paste from a package. Not that there's anything wrong with that. Boyfriend wasn't a fan, but I think it's because he loves the block paste curry (japanese style) the best. I have no idea what he used to eat before we met but I've introduced him to japanese curry and foie gras, amongst other fooding items, and he hoovers them like crazy. No matter though, cause I was a huge fan of the curry. It had great flavors, and next time I think I'll make it a bit more spicy by adding more cayenne pepper and cutting back on the sugar.

Stir in the tomatoes and salt and bring to simmering. Reduce the heat to low, cover the pan and simmer gently for 15 minutes. Add the sugar, lime juice and spinach. Stir until the spinach just wilts. Remove from heat, sprinkle with coriander and serve with steamed rice.
Posted by Eleana at 9:35 AM