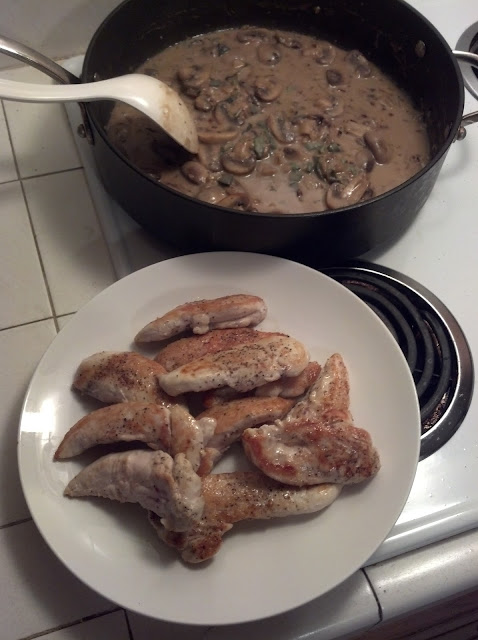 So the Superbowl tonight huh? Unlike my undying love (though this season, it's more like undying anger) for the Lakers, I don't have a football team that I root for. Since Boyfriend is a Patriots fan, I generally just root for them, but since the Patriots weren't playing this time, I could take the "west coast team" and root for the 49ers. Though there was a marvelous comeback, the final score just fell a bit short. Sorry for all my friends that are TRUE 49ers fans. *sad emoticon*

The above dish was not something I made for the Superbowl but something I threw together one night after I went spinning at the gym. Umm, there probably shouldn't have been all that cream (or actually, I made a substitute for heavy cream) in it, and I probably shouldn't have given in to the Boyfriend's request for white pasta, but the sauce was oh-so-good. I would probably recommend mashed potatoes next time, as there was not quite enough to coat a bunch of pasta. Or just doubling up on the sauce.

Melt butter in a large sauté pan on medium high heat. Add onions and garlic, sauté for until fragrant. Add mushrooms and parsley, and sauté for 5-10 more minutes, until mushrooms are a deep brown and the liquid has evaporated. Add vermouth to deglaze, scraping up any bits that may be sticking to the bottom of the pan (that's where all the flavor is). Stir in the cream thoroughly to incorporate. Bring to a boil, lower heat to medium and cook the sauce down until it is thick enough to coat the back of a wooden spoon (about 10 minutes).

In the meantime while the sauce is cooking down, heat olive oil in another large sauté pan on medium high heat. Sprinkle salt and lots of pepper over both sides of the chicken breast cutlets. Add cutlets to pan and cook for about 2-3 minutes on each side, until cooked through. Make sure you don't overcook, as dry chicken breast is all rubbery and gross.

Stir sage into sauce and season to taste with salt/pepper. Pour sauce over chicken to serve.

Serve alone, with mashed potatoes or pasta, or steamed vegetables. I think broccoli would have been great. Garnish with additional chopped fresh parsley. It'll look fancy.
Posted by Eleana at 9:59 PM