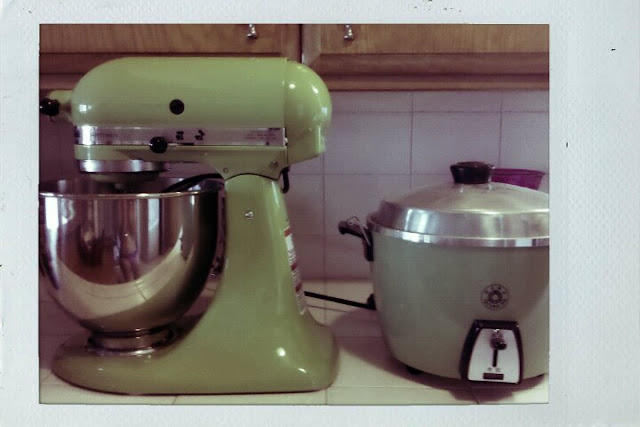 For my birthday last year, I received the most extravagant present ever. A KitchenAid stand mixer!! I've always wanted one of these babies - I think everything you make with it will magically come out amazing. I even knew which color I wanted - Spring Green, to match my retro looking rice cooker from Taiwan.

My family has always used this particular brand of rice cooker. My mom swears that she's used the same one since 1985. The new-fangled rice cookers weird me out; the kind that you only put water in with the rice. I like it when you put water in the rice AND into the cooker before setting the rice pot within. This is because you can also steam something else on top of said rice: steamed eggs, chicken legs, fish, etc. If you don't have a rice cooker, go buy one!! They make cooking rice so easy. This particular one was carted by my dad from Taiwan for me. Twice. The first time he checked it with his luggage, and when he got home, everything was smashed to smithereens. I forced him to carry-on a second one.

Boyfriend surprised me with this for my birthday last year, but alas, I haven't been on any sort of baking streak lately. Generally, baking is used as stress relief. I guess I must not be stressed! Or I've just been uninspired. He threatened to re-gift it back to me for our two-year anniversary at the end of the month if it wasn't used. That mixer was busted open and de-virgin-zed that very weekend! 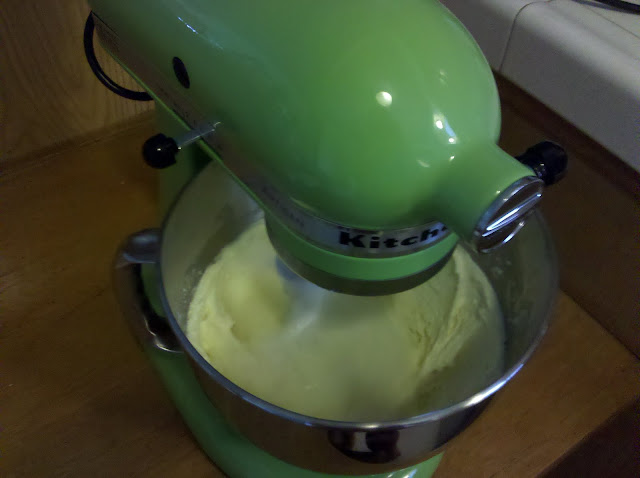 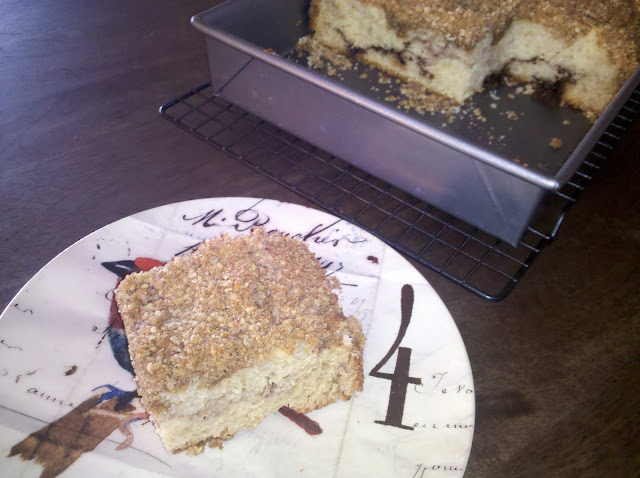 I made an absolute monster of a coffee cake for my first project. I figured there was no way in hell my hand-held mixer would be able to tackle this challange. Adam Roberts of The Amateur Gourmet also made it, and thought it was every bit as amazing as I did.

Make the crumb topping by putting flour, sugar and salt in a food processor, pulsing to mix. Add the pecans or walnuts (I used walnuts) and pulse until the nuts are finely chopped and thoroughly incorporated. Add the butter and pulse until combined until it looks like coarse sand. Cover with plastic wrap and refrigerate.

Make the chocolate cinnamon swirl by whisking together the sugar, cocoa powder and cinnamon in a small bowl.

In the bowl of an electric mixer fitted with the paddle attachment, cream the butter until smooth and ribbonlike. Scrape down the bowl and add the sugar. Beat until the mixture is smooth and starts to look fluffy. Add the eggs, one at a time, beating well after each addition. Scrape down the bowl and mix again for 30 seconds. Add the sour cream and vanilla and beat just until incorporated.

Add the dry ingredients in three additions, scraping down the bowl before each addition and beating only until each addition is just incorporated. Do not over mix.

Pour one third of the cake batter into the prepared pan. Use a spatula to spread the batter evenly. Sprinkle half the chocolate cinnamon swirl mixture over the batter, covering the entire surface of the batter.

Bake in the center of the oven, rotating the pan three times during baking, for 1 hour, or until a toothpick inserted in the center comes out clean. Let the cake cool in the pan on a wire rack for 30 minutes, then serve.
Posted by Eleana at 11:09 AM

Email ThisBlogThis!Share to TwitterShare to FacebookShare to Pinterest
Labels: dessert