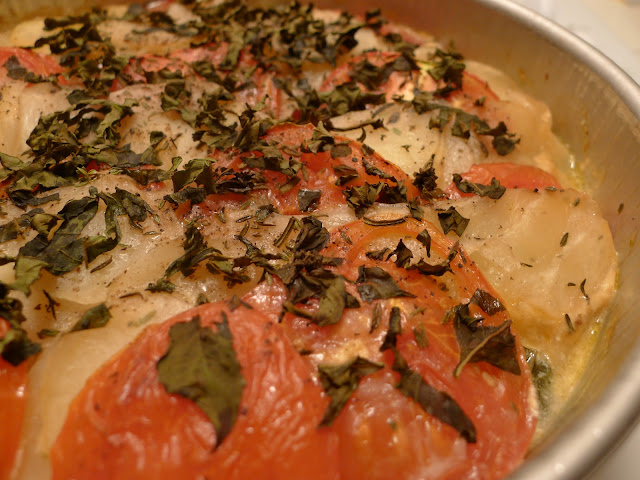 I'm so behind in blogging that I'm ashamed of myself. The Walking Dead has been over for weeks! Well, two weeks ... but still. And this is still for the episode before the midseason finale. And what a midseason finale it was. Hopefully they get rid of unreasonably angry women in the second half of the season.

Dinner was from Sunday Suppers at Lucques. It took a bit of preparation ahead of time but for the most part, everything came together pretty quickly. The gratin had to bake for almost three hours so definitely prepare for that if you want to make this dish!

Maybe I did something wrong but the gratin was a bit more watery than I would have liked. Anyone know what I did wrong? I think the tomatoes just have a lot of juice. Maybe I need to bake everything longer or seed the tomatoes first or just use less tomatoes.

The hunt for ahi tuna to sear was also an adventure. I first went to Whole Foods and ahi tuna was on sale for ...wait for it ... drum roll please ... $39.99 a pound. I almost fainted. Then I went to Trader Joe's and they were being sold for $16.99 a pound, which was a lot more reasonable. But the tuna wasn't too tender after being seared. I guess the more expensive quality does make a difference! 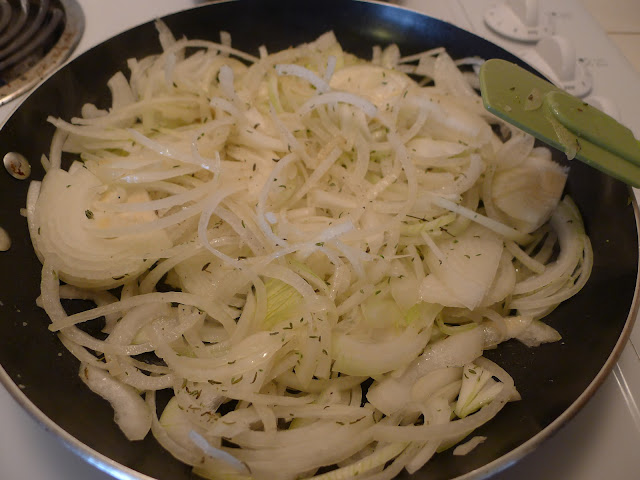 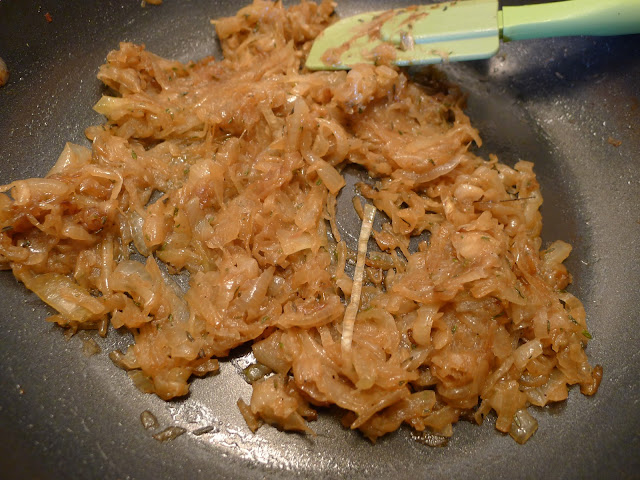 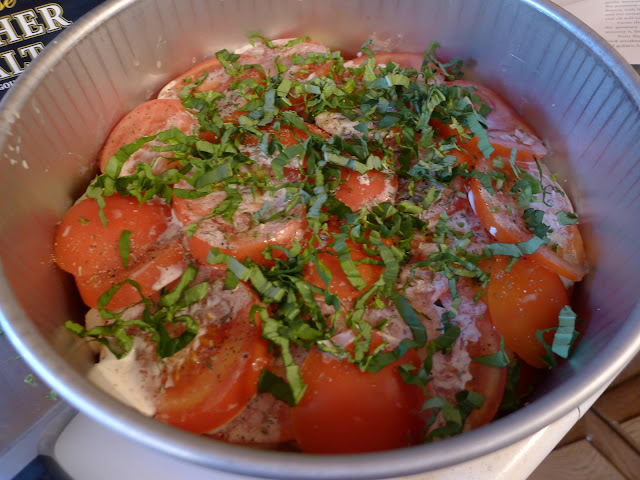 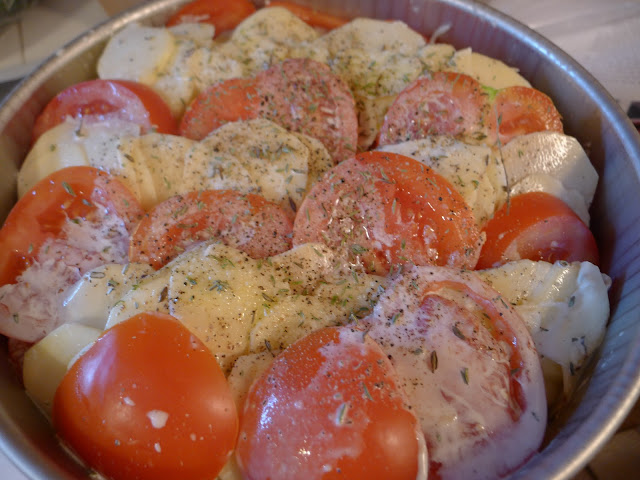 layered and ready for baking

Preheat the oven to 350degreesF.

Use a mandoline to slice the potatoes into 1/8-inch-thick rounds. Toss them with the cream, 1 tsp thyme, 1 tsp salt, and some freshly ground black pepper.

Cut the tomatoes into 1/4-inch-thick slices, arrange them on a plate, and season them with 1 tsp salt and some pepper.

Place half the caramelized onions in an even layer in a 9x9 inch gratin or baking dish. Arrange one layer of alternating potatoes and tomatoes on top of the onion layer. Drizzle with 2 Tbsp of the cream from the potatoes and 1 Tbsp olive oil. Season with 1/4 tsp salt, a healthy pinch of pepper, 1/2 tsp thyme and half the basil.

Scatter the rest of the caramelized onions over the potatoes and tomatoes.

Cover the baking dish tightly with aluminum foil. Bake about 2 hours, until the potatoes are tender when pierced. Remove the gratin from the oven and uncover it, being careful of the steam.

Turn the oven up to 450degreesF and return the gratin, uncovered, to the oven. Cook another 25-30 minutes, until the juices have thickened and the top is nice and golden brown (as in "gratinéed"). 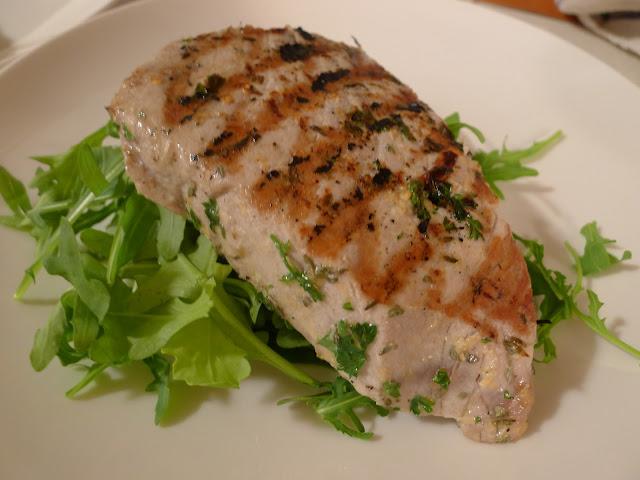 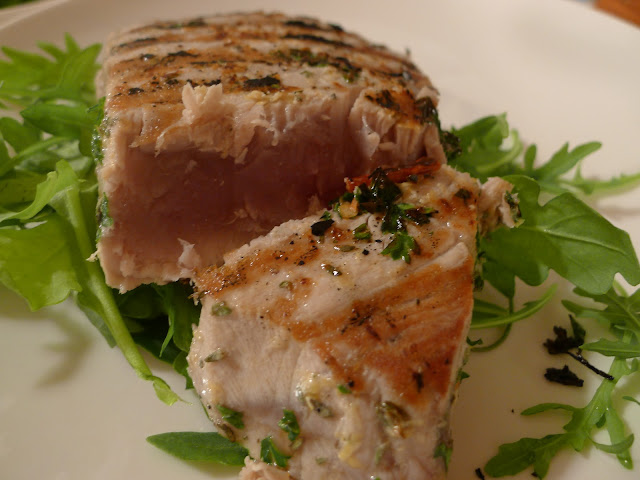 perfectly seared on the inside

Season the fish with the lemon zest, chile, thyme and parsley. Cover and refrigerate at least 4 hours.

Light the grill 30 to 40 mintues before cooking, and remove the fish from the refrigerator to come to room temperature. Alternately, use an indoor grill pan over high heat.

When the coals are broken down, red, and glowing, brush the fish with olive oil, and season on both sides with fleur de sel and cracked black epper. Grill the fish 2-3 minutes per side, rotating it once or twice. The tuna should be well seared but still rare.

Scatter the arugula onto a large platter and arrange the tuna on top. Squeeze some lemon juice over the fish, and then drizzle the fish with the super good olive oil. Dollop each piece of fish with rouille (I didn't make the rouille but the recipe is available in the book).
Posted by Eleana at 6:26 PM