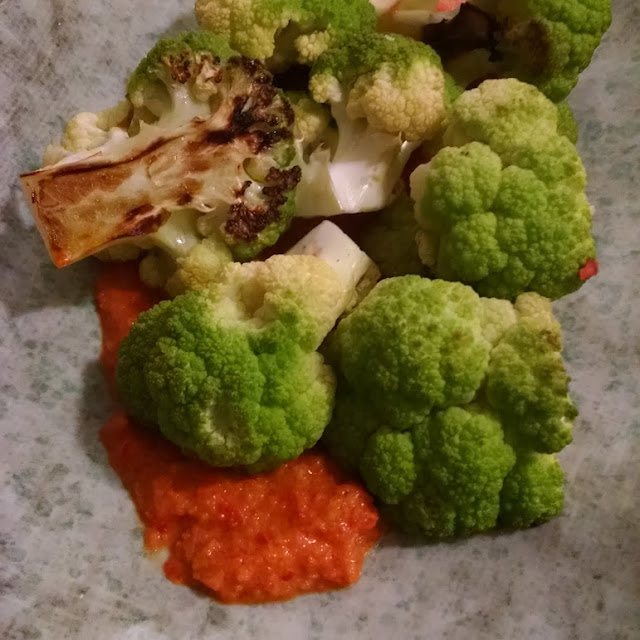 Guys. Look at that picture. I know the vegetable looks kind of weird - that's broccoflower, which is a hybrid cross between broccoli and cauliflower (clever, huh?). But don't focus on the genetically mutated cross-bred vegetable, Focus on what's underneath the broccoflower - the romesco sauce. I wanted to eat that sauce with a spoon, in great big mouthfuls. But I refrained cause I'm a lady.

The sauce pairs well with chicken, beef and basically any sort of roasted vegetable. I roasted more cauliflower afterwards and it also tasted great!

Set oven to broil and arrange the bell peppers (cut side down), the tomato (cut side up) and garlic on a baking sheet. Broil until the garlic turns a golden brown, about 3-5 minutes. Turn garlic and broil a couple minutes more. Transfer garlic to a bowl and cover with plastic wrap. Continue to broil peppers and tomatoes until the peppers are charred and blackened, about another 5-10 minutes. Remove to the same bowl as the garlic, cover with plastic wrap and set aside to cool.

In a dry pan over medium heat, toast the almonds. Once they are a light golden brown, transfer to a food processor and pulse until they are broken up (not too fine).

Peel the skins off the peppers and tomatoes, being careful as they are hot. The skins should come off fairly easily, but just try to get most of it.

Combine the rest of the ingredients into the food processor with the almonds. Puree until almost smooth. Taste and adjust seasonings, adding more vinegar, honey or salt as needed. Eat with roasted veggies!
Posted by Eleana at 9:16 AM